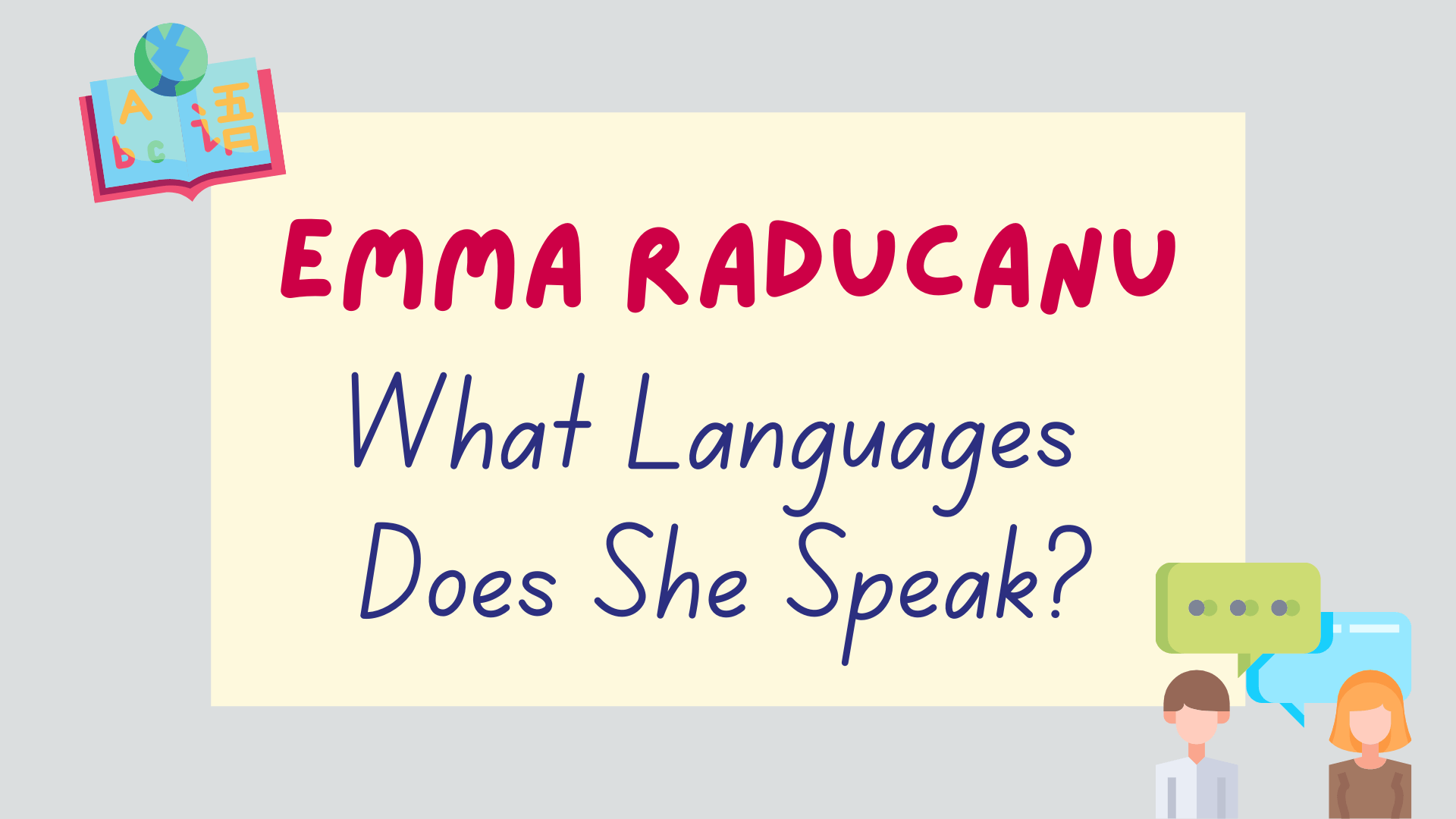 Emma Raducanu is a British professional tennis player who won the women’s single title at the US Open in 2021.

You may be wondering how many languages does Emma Raducanu speak? She has had huge success and has a multicultural heritage so it’s natural to wonder if she also speaks multiple languages.

Don’t worry, we’ve got you covered. This post will go into detail on what languages Emma Raducanu speaks, how fluent she is in them and how she learnt them.

What Languages Does Emma Raducanu Speak?

Emma speaks English to a native level as she was born in Toronto, Canada in 2002 but then moved to England when she was 2 years old.

She was then raised in England and attended English speaking schools so naturally she speaks English natively.

Emma speaks Mandarin as her mother, Renee, is Chinese and is from Shenyang, China. Emma also still has a grandmother who lives in Northeast China.

Emma stated in an interview that when she speaks to her mother, she switches between both Mandarin and English.

She mentioned that she loves speaking Mandarin as it feels like a secret language that she can speak with her just Mum so other people like her Dad won’t be able to understand.

She also said she uses her Mandarin skills to speak with her grandparents and relatives back in China.

Emma can speak Mandarin to a fluent level.

After winning a title at the US Open in 2021, she gave an interview in Mandarin. She spoke with China Today telling viewers in fluent Mandarin that she couldn’t wait to come and play in China.

She also mentioned in this interview that her mother is from north east China and that she regularly goes to China to see family members including her grandmother.

You can see Emma showcasing her fluent Mandarin skills in the video below:

She also released a thank you message to fans in fluent Mandarin saying ‘Hi everyone, I wanna say thank you guys and I hope you could enjoy my tennis. I’m thrilled to win. Love you all, see you.’

Check out Emma Raducanu speaking Mandarin in the video below:

Emma picked up Mandarin as a child whilst spending time with her Chinese mother and Chinese family members.

Emma also mentioned in an interview that she needs to work a bit on her Chinese reading and writing but is familiar with the writing system.

In the video below, Jessie from the YouTube channel ‘Chinese with Jessie’ analyzes Emma’s Mandarin.

She says that her tones are spot on and very accurate and seems impressed with Emma’s Mandarin skills.

Find out what languages Roger Federer speaks too! (Hint: a lot)

Emma speaks Romanian because her father, Ian Răducanu, is Romanian. He was born in Bucharest, Romania and Emma still has a grandmother who lives in Bucharest.

She has stated in an interview previously that she goes to Romania a couple of times a year to stay with her grandmother. She mentions that she loves the food and that her grandmother’s food is special.

She also mentioned in an interview that she speaks Romanian with her grandmother.

Emma said that she never studied the Romanian language. She just picked it up as a young child from being around her Romanian family and needing to be able to communicate with them.

She mentioned in an interview during the Transylvania Open, which takes place in Romania, that she can understand around 80% of Romanian and she is sometimes nervous to speak it. She went on to say that she sometimes struggles to find her words and vocab.

She then also said that when she spends time in Romania and immerses herself in the language, she picks it up reasonably fast.

She did show off her Romanian skills at the Transylvania Open when she addressed the crowd from center court, answering questions in Romanian.

As you can see in the video, Emma Raducanu definitely isn’t a fully fluent Romanian speaker. At one point, she answers in English following a question in Romanian from the interviewer stating ‘I understood everything you said but I can’t find my words’.

Despite this, she did answer the majority of the interview in Romanian and fully understood the Romanian being spoken to her. It’s clear she speaks Romanian to a good level and can express herself in the language.

Another short video of Emma speaking Romanian can be seen below. In the video she gives a short message to fans prior to taking part in the Transylvania Open in 2021.

It may surprise you that Emma Raducanu already speaks 3 languages at just 19 years old. It surprised us too!

Thanks for reading this post which answers the question ‘how many languages does Emma Raducanu speak?’.