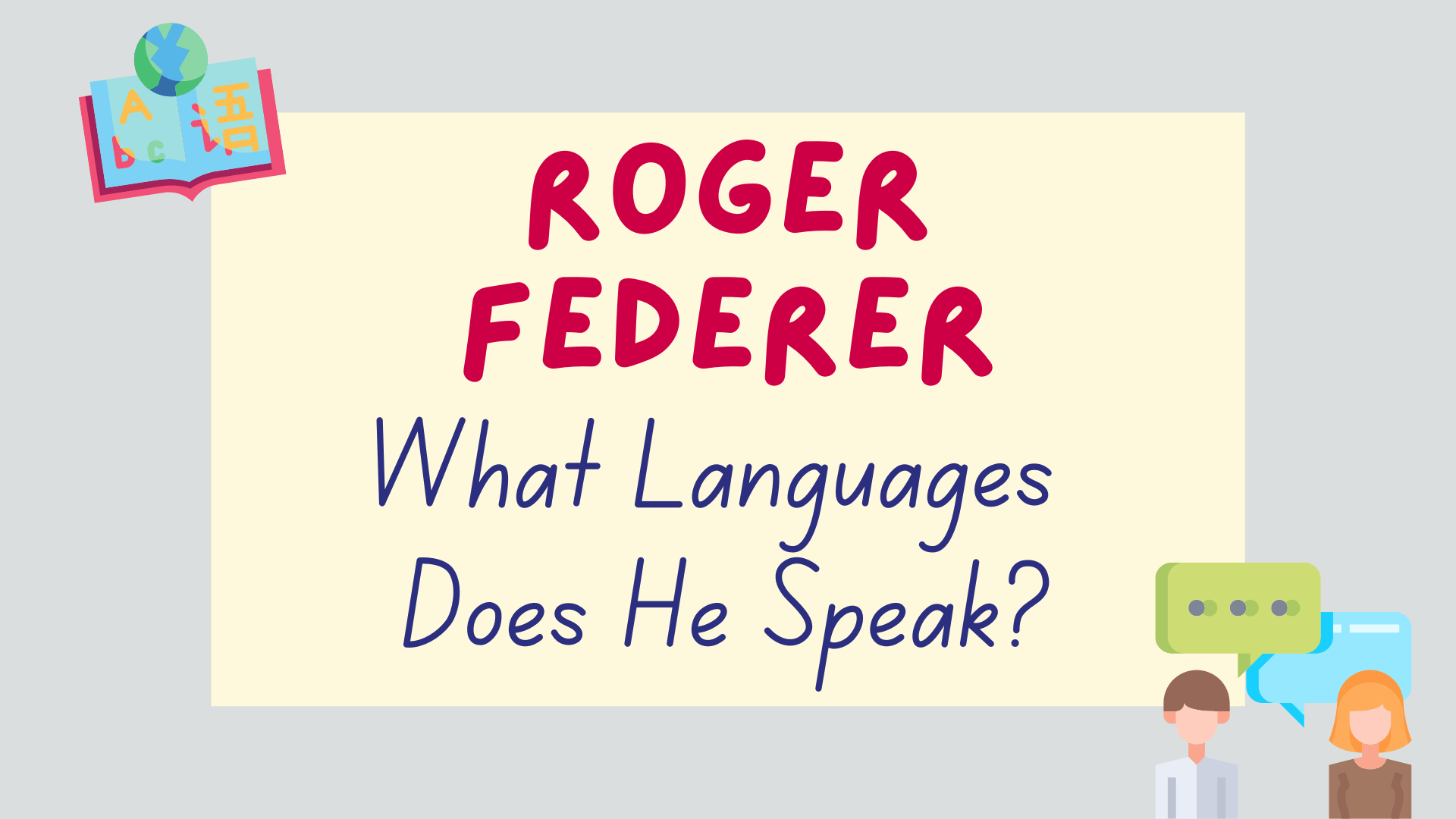 You may be wondering how many languages does Roger Federer speak? He has had huge success so it’s natural to wonder if he also speaks multiple languages.

Don’t worry, we’ve got you covered. This post will go into detail on what languages Roger Federer speaks, how fluent he is in them and how he learnt them.

What Languages Does Roger Federer Speak?

Roger Federer is already hugely popular around the world due to his exceptional tennis skills but one thing that makes him even more popular is the fact that he can communicate in a variety of languages.

Federer grew up in Switzerland with a Swiss-German father and an Afrikaner mother. His mother originally came from South Africa.

As his father didn’t speak Afrikaans, English was one of the common languages between his parents and as such he learnt English from a young age alongside Swiss German.

He mainly speaks English with his mother and actually grew up speaking a mixture of Swiss German, German and English at home.

He clearly speaks English to a very high level and even once admitted that he thinks in a mixture of Swiss German and English.

He also admitted that he mainly speaks English to his children but sometimes speaks a bit of Swiss German with them too.

You can see Roger Federer speaking English in the video below:

Roger Federer spoke Swiss German growing up as he was born in the town of Basel in Switzerland in 1981 and has a Swiss-German father.

One of the main languages spoken in Switzerland is Swiss German. Alongside Swiss German, he is also able to speak Standard German which he likely learnt in school.

Although he can speak both varieties of German, he is most comfortable speaking in Swiss German as this is his native language and the one he speaks at home.

Federer grew up in the small town of Basel in Switzerland which lies really close to the borders of France and Germany.

Being so close to the German border, he would have picked up Standard German easily.

You can see Roger Federer speaking German in the video below:

Federer’s home town of Basel and the subsequent areas where he grew up are very close to the French border so it’s likely he heard French around him as a child.

It’s likely that Federer learnt the basics when he was in school but it wasn’t until he was 14 that he really got to improve his French.

At age 14, Roger Federer moved to the town of Ecublens in Switzerland to attend the Swiss national tennis academy. This town is in the French-speaking part of the country.

When he first arrived, he said that he spoke little French and felt very isolated and was instantly labeled as the ‘Swiss German’.

He spent 3 years living and training in Ecublens, slowly picking up the language. By the time he left Ecublens, he could speak French very well.

He regularly gives interviews in French and clearly has a very strong grasp of the language, now speaking it with full fluency.

You can see Roger Federer speaking French in the video below:

Roger Federer was born to a Swiss-German father and an Afrikaner mother named Lynette Durand.

His mother Lynette was originally from South Africa and spoke Afrikaans as her native language.

Most Afrikaners also speak English fluently so this would have been her most used language at home and ultimately the language she uses to communicate with Roger.

He can speak Italian to a conversational level.

Federer rarely shows off his Italian skills in public but we have seen him addressing crowds in Italian whilst he was playing at the Italian Open tournament.

Italian is spoken in parts of Switzerland so it’s likely that Federer picked some up as a child growing up in Switzerland.

Yes, Roger Federer can speak a little bit of Swedish.

He can speak Swedish to a basic level.

When talking about languages he’d like to learn in 2010, he mentioned Swedish as he said that he found the language funny.

He learnt some Swedish from his former tennis coaches Stefan Edberg and Peter Lundgren who are both Swedish.

What Are Roger Federer’s Views On Learning Languages?

Swiss people in general are usually multilingual. They often use multiple languages on a day-to-day basis.

Reports have shown that 64% of Swiss people use multiple languages at least once a week.

Speaking multiple languages from a young age is part of being Swiss.

Federer’s language skills certainly do come in handy at his tennis tournaments with his interviews and press conferences often covering several different languages.

At press conferences, he is regularly asked questions in English, Swiss German, German and French. He always generously replies in each language, taking the time to answer the question properly.

He also added that he loves speaking to the press about tennis to help people understand that tennis is interesting and it’s certain that his language abilities will help him do that.

Roger Federer loves to learn bits of other languages to connect with his fans. We even once saw him saying a few words in Mandarin to impress his Chinese fans at the Shanghai Masters tournament.

Check out Roger Federer speaking Mandarin Chinese in the video below:

When speaking about his Mandarin skills, Federer said that he would love to learn it and actually tried learning it for an hour once but found it very difficult.

Federer also once said that he can understand just a little bit of Spanish but he can’t speak it very much.

Check out Roger Federer speaking a little bit of Spanish in the video below:

It may surprise you that Roger Federer speaks 6 languages. It surprised us too!

It’s great that Roger has taken the time to learn so many languages and uses them as often as he can to connect with his fans.

Thanks for reading this post which answers the question ‘how many languages does Roger Federer speak?’.