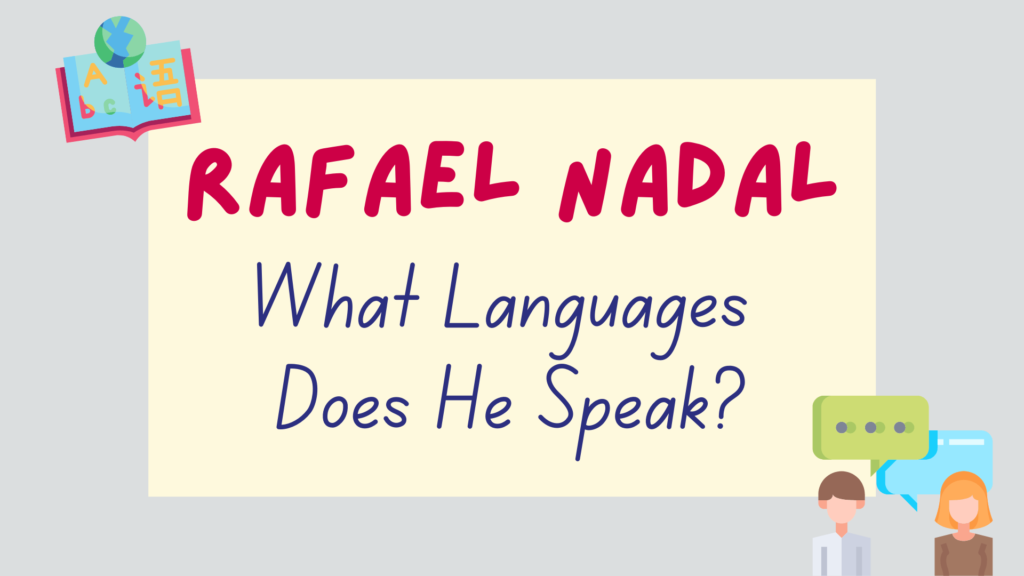 You may be wondering how many languages does Rafael Nadal speak? He has had huge success so it’s natural to wonder if he also speaks multiple languages.

Don’t worry, we’ve got you covered. This post will go into detail on what languages Rafael Nadal speaks, how fluent he is in them and how he learnt them.

What Languages Does Rafael Nadal Speak?

Having grown up bilingual with 2 native languages, Rafael Nadal learnt 3 more as his tennis career took off.

Spanish is actually one of his native languages as he was born in Mallorca, Spain in 1986.

Even though he wasn’t born on the Spanish mainland, Mallorca (which is part of the Balearic Islands) is part of Spain and most of its residents can speak Spanish.

He likely grew up speaking Spanish at school and sometimes at home.

You can see Rafael Nadal speaking Spanish in a press conference at the Australian Open in 2019 in the video below:

When Rafael Nadal began finding incredible success in tennis as a teenager, he started traveling the world for tennis tournaments.

Whilst learning English isn’t a necessity for a professional tennis player, being able to communicate effectively with the press and fans makes a tennis players life much easier.

At the age of 15, he began learning how to speak English so that he could speak with other players, the press and the people around him.

Rafael Nadal speaks English to an intermediate level. He does still have a thick Spanish accent when he speaks and does make the odd grammatical error.

Despite his thick Spanish accent, he speaks clearly enough that you can easily understand him.

As he only began learning English at 15 years old, there certainly are gaps in his knowledge but he can speak English enough to express his thoughts and feelings in most situations.

When speaking once about his English abilities, Nadal said ‘it is a slow process but making some progress. Now I think I am much more comfortable with my English, however it is still difficult when I speak about something that is not tennis’.

As his English has improved over the years, he’s now much more comfortable talking about a range of topics alongside tennis.

Check out Rafael Nadal speaking English recently in the video below. In this video he discusses all the things he likes to take with him when he is traveling.

Rafael has improved his English tremendously over the years. Early videos of him speaking English show him struggling with the language and needing help from his team to communicate.

Today, he can speak English with a lot more confidence even if he does still make the odd mistake.

Check out the video below which shows Rafael Nadal’s English speaking journey over the years:

As you can see in the above video, early in his career he couldn’t speak much English at all, often slipping in Spanish words to get his message across or using English words incorrectly.

Later in the video, he was much better at articulating himself in English and had little difficulty in answering questions.

As well as Spanish, Rafael is a native speaker of Catalan due to his upbringing in Mallorca and being raised bilingual.

Rafael Nadal speaks Balearic Catalan which is a dialect of Catalan spoken in the Balearic Islands, including Mallorca where he is from.

Specifically he speaks the Mallorquí dialect which is local to the island of Mallorca.

He was born in the town of Manacor in Mallorca where his parents, Sebastián Nadal Homar and Ana María Parera Femenías, were also born and raised.

Due to this, he likely grew up speaking Catalan with family and friends.

Mallorca has 2 official languages – Spanish and Catalan. Catalan is a language that is widely spoken in the Catalonia region of Spain, Andorra, the Balearic Islands and parts of southern France.

There are approximately 6 million speakers of Catalan.

You can see Rafael Nadal speaking Catalan in 2019 in the video below:

In the above interview, Rafael Nadal was being interviewed for ‘Diario de Mallorca’ and spoke his native Balearic Catalan dialect.

Rafael doesn’t use his French skills often but has been filmed speaking French a few times over the years, mainly when taking part in the French Open.

Back in 2015, he delighted a crowd in Paris by showing off some French skills.

In the video, a French reporter asked him a question in English but Rafael answered the question in French much to the delight of his French fans.

Check out Rafael Nadal speaking French in the video below:

It’s unclear exactly how well Rafael Nadal can speak French but based on the above video it looks like he is either an intermediate or advanced speaker.

He began learning French as his career progressed.

Did you know? Tennis superstars Serena Williams and her sister Venus Williams speak French too.

We haven’t seen Rafael Nadal speaking much Italian so it’s unclear exactly how well he speaks the language.

However, from the few times that we have seen him speaking Italian in public, he appears to be an intermediate speaker.

No doubt his mastery of the Spanish language and knowledge of French helped him learn Italian as the 3 languages share many similarities.

Check out Rafael Nadal speaking Italian in the video below:

Rafael Nadal’s Italian does have a distinctive Spanish accent however he can be understood and is clearly very competent at speaking the language.

It may surprise you that Rafael Nadal speaks 5 languages. It surprised us too!

Thanks for reading this post which answers the question ‘how many languages does Rafael Nadal speak?’.