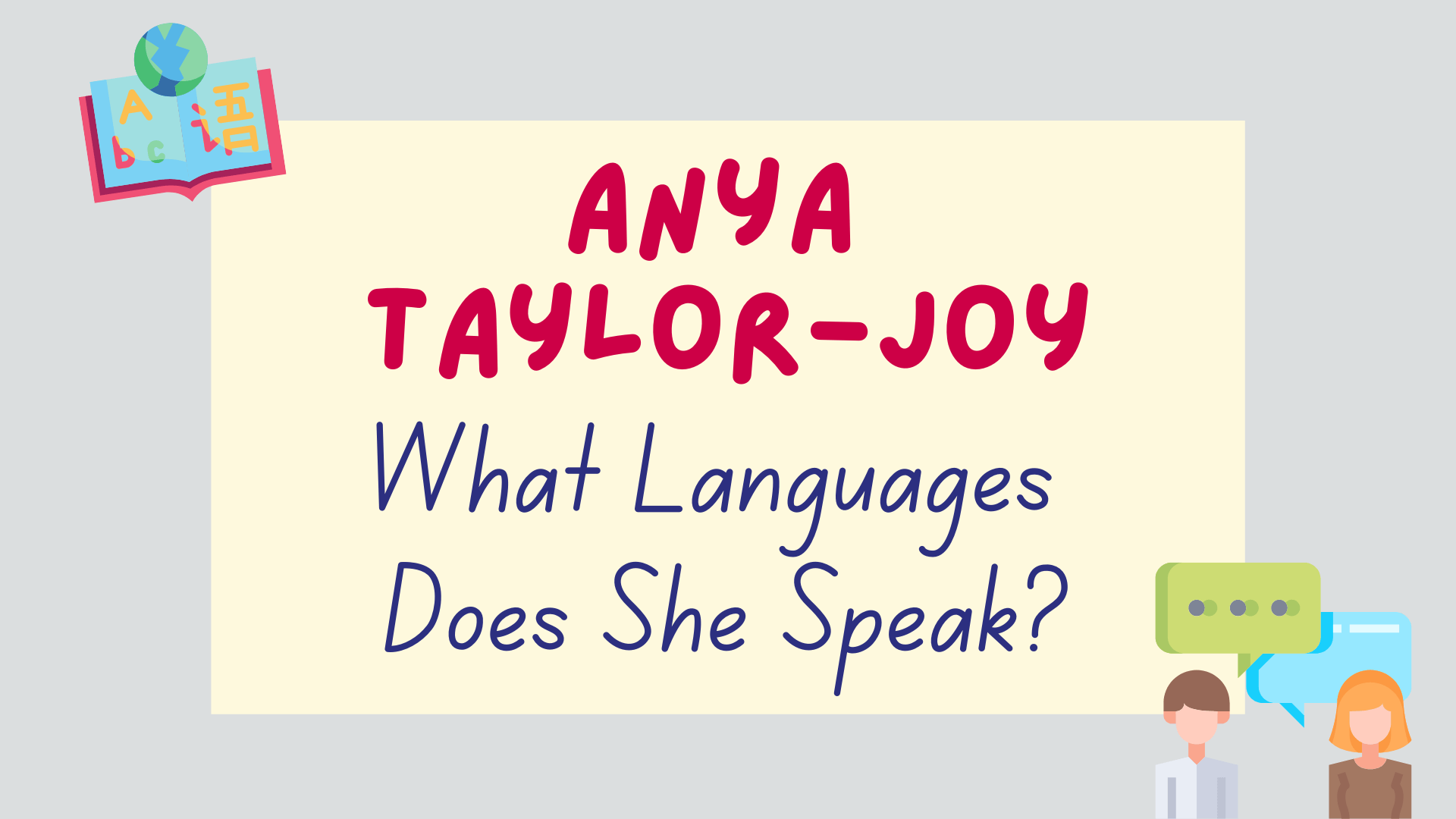 Anya Taylor-Joy is an actress who has won several awards including a Golden Globe.

You may be wondering how many languages does Anya Taylor-Joy speak?

She has lived in several different countries and has had huge success so it’s natural to wonder if she also speaks multiple languages.

Don’t worry, we’ve got you covered. This post will go into detail on what languages Anya Taylor-Joy speaks, how fluent she is in them and how she learned them.

What Languages Does Anya Taylor-Joy Speak?

Anya Taylor-Joy speaks English fluently as she has lived in the UK for most of her life but surprisingly, English isn’t her first language.

When speaking English, Anya’s accent is somewhere between British and American but definitely sounds more British than anything else.

She’s a natural mimic and tends to mimic the accent which is being spoken around her.

You can see Anya Taylor-Joy speaking in her natural English accent in the video below:

Anya was born in Miami, Florida in 1996 however she described her birthplace as a ‘fluke’.

Her parents were actually just on vacation in Miami at the time but because of her birthplace she does hold American citizenship (US law states that anyone born in the US has a right to citizenship).

She has a mix of Argentinian, British and Spanish heritage through her parents and grandparents.

Her father, Dennis Taylor, is an Argentine with a British father and an English-Argentine mother.

Anya’s mother, Jennifer Joy, is the daughter of a British father and a Spanish mother from Barcelona.

Anya Taylor-Joy was initially raised in Buenos Aires, Argentina where the national language is Spanish.

Most of her family still lives in Argentina and she visits them frequently. Anya has also expressed a desire to return to Argentina to live there for a while because she misses it.

Due to her heritage and the fact that she was raised in Argentina, Anya Taylor-Joy speaks fluent Spanish.

Spanish is actually her first language and she even uses it from time to time in interviews.

Check out Anya Taylor-Joy speaking Spanish in the video below where she did an interview with Vogue Spain about what she keeps in her bag.

Currently, Anya Taylor-Joy hasn’t starred in any Spanish-speaking roles but she has said that she would love to and she is currently waiting for the right one.

She did say though that she has a very thick Argentine accent which may not be ideal for movie roles.

How Did Anya Taylor-Joy Learn English?

Anya Taylor-Joy lived in Argentina until age 6 when her family relocated to London, UK due to the political situation in Argentina.

When Anya first arrived in London at age 6, she didn’t speak any English.

She described the move as ‘traumatic’ and she initially refused to learn English for the first 2 years in the hopes of returning to Argentina.

She said she was heavily bullied at school as the children didn’t get her. She said that she was too English to be Argentine and too Argentine to be English.

She also admitted hating London at first as she was used to Argentina with lots of animals and lots of horse-riding but she eventually got used to it.

She eventually started learning English properly at age 8 as she was struggling to make friends due to the language barrier.

Anya said that her uncle taught her to read and speak English at the same time using the Harry Potter books.

She said that at first she was either casting spells constantly or using really annoying words.

Now Anya Taylor-Joy speaks English perfectly and it’s hard to tell that she isn’t a native.

Yes, Anya Taylor-Joy can speak a bit of French.

During an interview with People magazine about her film ‘Emma’, Anya was asked what languages she speaks.

She replied saying ‘2 & a half’ with French being the ‘half’ language.

She said that her mom speaks French and would always talk to her in French when she was a child.

She also mentioned that whenever she visits Paris, she can fully understand what people are saying but she never talks back in French.

Anya said that she would love to live in France for a while so that she could learn to speak French fluently.

Check out Anya Taylor-Joy speaking French a little bit in the below video.

As you can see, Anya can clearly understand French as she doesn’t need the interviewer to translate for her.

She does admit that she doesn’t practice speaking French much.

What Are Anya Taylor-Joy’s Views On Learning Languages?

In an interview she once said that as well as perfecting her French, she’d love to also learn German and Italian.

She said that she has a very immersive learning style meaning that she learns languages by being surrounded by them.

For this reason, she wants to live in several different counties so that she can absorb the languages.

It may surprise you that Anya Taylor-Joy speaks 3 languages. It surprised us too!

We love that Anya has such a keen interest in learning languages and wants to learn several more soon alongside her demanding acting career.

Thanks for reading this post which answers the question ‘how many languages does Anya Taylor-Joy speak?’.