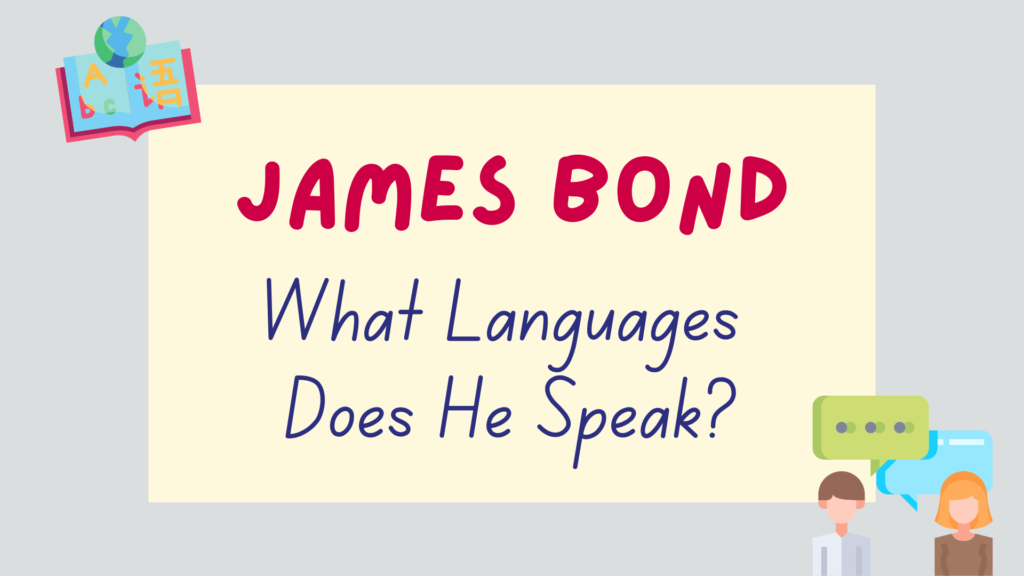 James Bond is a British MI6 agent, also known as 007, who has been portrayed by several different actors over the years including Sean Connery, Roger Moore, Pierce Brosnan and Daniel Craig.

You may be wondering how many languages does James Bond speak? We’ve seen him speaking several different languages over the years so it’s natural to wonder how many he speaks.

Don’t worry, we’ve got you covered. This post will go into detail on what languages James Bond speaks, how fluent he is in them and how he learned them.

What Languages Does James Bond Speak?

English is his first language as he is British and he spent a large part of his childhood in the UK.

His parents communicated in English so this would naturally have been the first language he picked up.

We know a little bit about James Bond’s background from the original novels written by Ian Fleming.

In his novel ‘You Only Live Twice’, Flemming includes some details about Bond’s parents and childhood.

He reveals that Bond has a Scottish father and a Swiss mother.

His mother’s name is given as Monique Delacroix who is from Canton de Vaud in Switzerland.

The language of this area of Switzerland is French meaning that Bond’s mother was a native French speaker which is likely why he knows the language so well.

The novel also revealed that Bond spent most of his early childhood living abroad due to his father’s job as a military weapons company representative.

Having a French-speaking mother and living abroad is what allowed him to become fully fluent in French.

It was also stated that Bond spent some time studying at the University of Geneva in Switzerland.

In order to study at this university, students are required to have a good level of French as the majority of classes will be delivered in French.

It’s pretty clear that Bond speaks fluent French as we’ve seen him using the language several times in the movies.

The novel ‘You Only Live Twice’ also reveals that Bond became fluent in German as a child due to his father’s job as a military weapons company representative.

Bond lived abroad throughout his early childhood and learned to speak German fluently.

Fleming also noted that Bond was taught to ski in Kitzbühel, Austria which is a German-speaking country. Presumably this took place in German.

Bond first shows off his German skills in the first Bond novel ‘Casino Royale’. In this book, Bond is fighting against a villain named ‘Le Chiffre’.

Throughout the book they converse with each other in English, French and German.

You can see James Bond speaking German in the video below:

We know that James Bond can speak a little bit of Danish as in one of the movies, he’s shown learning some Danish.

In the movie ‘Tomorrow Never Dies’, Bond is seen taking a Danish lesson. He notes ‘I’m just up here at Oxford, brushing up on a little Danish’.

He’s also seen speaking some Danish with one of his lovers.

You can see James Bond speaking Danish in the clip below:

It looks like James Bond can speak conversational Russian.

This was confirmed in the ‘Casino Royale’ novel which states that Bond has a working knowledge of the Russian language.

We actually get to see Bond speaking Russian in the 1999 film ‘The World Is Not Enough’.

There is a scene where a woman switches from English to Russian to try and confuse Bond however he calmly replies in Russian saying ‘I studied at Oxford’.

You can see James Bond speaking Russian in the short clip below:

In the 1967 movie ‘You Only Live Twice’, Bond mentioned that he studied ‘oriental languages’ at Cambridge University but he doesn’t elaborate any further.

It’s unclear which languages he studied specifically but Japanese is the most likely.

He mentioned his oriental language studies after he is offered a Japanese dictionary prior to embarking on a journey to Japan.

Bond refuses the dictionary, citing his studies as the reason he doesn’t need it. Despite this, we never actually see James Bond speaking any Japanese in the film.

In Tomorrow Never Dies, we see Bond looking confused at a Chinese keyboard. It appears that he couldn’t read or type anything in Chinese so it’s unlikely that he speaks Mandarin.

It may surprise you that James Bond speaks several languages. It surprised us too!

Although his exact proficiency in many of these languages in unclear, it definitely looks like James Bond is a talented linguist.

Thanks for reading this post which answers the question ‘how many languages does James Bond speak?’.