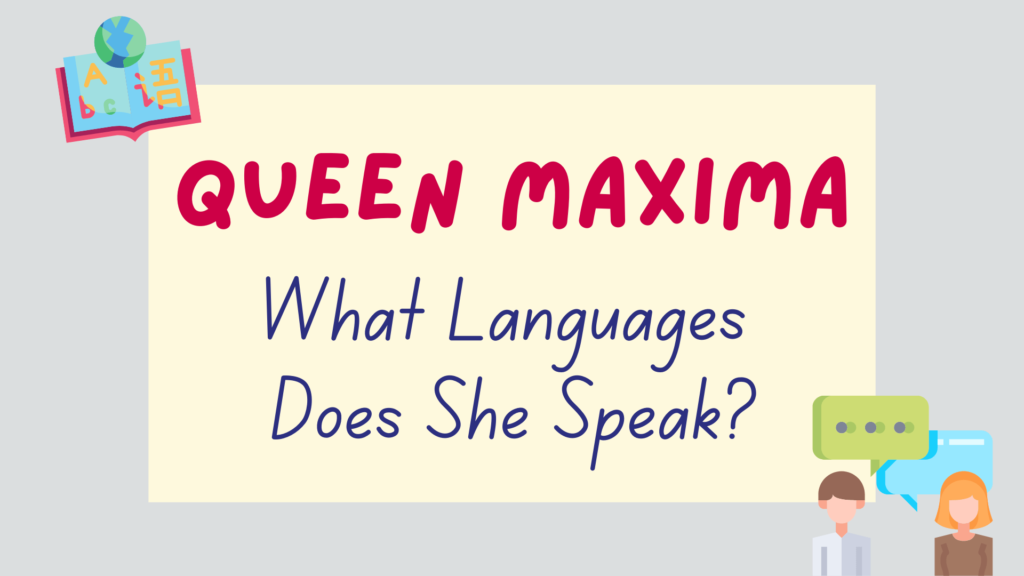 Queen Maxima is the wife of King Willem-Alexander making her the Queen of the Netherlands.

You may be wondering how many languages does Queen Maxima speak?

She has lived in several different countries so it’s natural to wonder if she also speaks multiple languages.

Don’t worry, we’ve got you covered. This post will go into detail on what languages Queen Maxima speaks, how fluent she is in them and how she learned them.

What Languages Does Queen Maxima Speak?

Here are her levels in each language:

Queen Maxima’s native language is Spanish as she was born in Buenos Aires, Argentina.

Maxima was born Máxima Zorreguieta Cerruti to an Argentinian family who spoke Spanish at home so naturally Spanish also became her first language too.

Spanish is also the main language spoken by people in Argentina.

Growing up she attended a bilingual school where classes were taught in both English and Spanish.

You can see Queen Maxima speaking Spanish in the video below:

Did you know? Famous first lady Jackie Kennedy also spoke Spanish as well as 3 other languages.

Yes, Queen Maxima can speak Dutch fluently. She learned it when she married into the Dutch royal family.

As Maxima was born and raised in Argentina, she didn’t know any Dutch when she first met her future husband who was a Dutch prince at the time.

Over the course of their 2-year relationship prior to getting engaged, she began learning Dutch and became fully fluent after they got married.

After Maxima’s engagement to Willem-Alexander was announced in 2001, she addressed the nation in Dutch for the first time during a live television broadcast.

At the time, she only spoke Dutch to a basic conversational level.

You can see Queen Maxima speaking Dutch during this press conference in the video below:

As you can see in the video, although she’d only been learning Dutch for a short time, Maxima already appeared to be confident in the language.

She does read from a script during the speech which likely helped a lot and we do see her stumbling over her words at some points but overall she delivers the speech well and the Dutch public were impressed.

A few months later, she was granted Dutch citizenship by a royal decree and now holds dual citizenship of both the Netherlands and Argentina.

You can see Queen Maxima speaking Dutch more recently in the video below:

By this point, her Dutch is much more fluent and she can clearly speak the language with ease.

Learning Dutch was hugely important for her as it allowed her to fully integrate into Dutch society and win over the favor of the public.

In the past, Maxima has emphasized the importance for immigrants to the Netherlands to learn the Dutch language (just like she did) so they can fully integrate into society as well.

How Did Queen Maxima Learn Dutch?

Queen Maxima started taking Dutch classes back in 1999 when she was living in New York. This was right at the start of her relationship with Willem-Alexander.

In the year 2000, she moved to Brussels to be closer to Willem-Alexander. This is where she began an intensive Dutch course.

By the time her engagement to the Dutch prince was announced in 2001, she could speak Dutch to a basic conversational level.

At this time it has been noted that she could definitely string a sentence together but she only used simple words and often got them in the wrong order.

Over time, her accent and fluency improved.

In a later interview, Maxima admitted that in the early days she found children’s TV shows in Dutch to be helpful.

In an interview in 2021, she admitted that, although her Dutch is pretty fluent now, she still learns new words every day.

Does Queen Maxima Speak Dutch With an Accent?

Native Dutch speakers have noted that Queen Maxima speaks Dutch very well and only has a slight accent.

It’s likely that she had the best teachers and after joining the Dutch royal family in 2002, she may have worked with a dialect coach to make her accent sound more natural.

After living in the Netherlands for over 20 years now and speaking Dutch daily, she has almost lost her accent (but not quite).

Yes, Queen Maxima can speak English fluently as she attended a bilingual school as a child.

As a child, Maxima attended Northlands School which is actually a bilingual school where classes are taught in both Spanish and English.

By attending a school like this, it allowed Queen Maxima to become fluent in English.

After finishing her studies at Northlands School, Maxima moved to the US to complete a master’s degree.

As the course would have been delivered in English, she must have been fully fluent by this point in order to be accepted into the program.

At one point, Maxima even worked as an English teacher where she taught both children and adults.

In 1996, she moved to New York City where she worked as an investment banker for multiple banks and even became vice president of her division. She stayed in New York until mid-1999.

In fact, when she started her relationship with the future King Willem-Alexander in 1999, their main language of communication was English.

They spoke English because, at the time, Maxima didn’t speak Dutch and Willem-Alexander didn’t speak Spanish.

English comes in very useful for her work as she is often traveling around the world meeting with people from various countries.

You can see Queen Maxima speaking English in the video below:

As you can see, Maxima speaks English very fluently and with ease.

Many people have noted that she does have a slight British accent, particularly when saying certain words.

This is likely because she learned to speak English at Northlands School in Argentina which was founded by two British women.

Yes, Queen Maxima can speak French to a conversational level however she isn’t fluent.

She learned to speak French as a child at school.

As a child, Maxima attended the private Northlands School which is a bilingual school with classes taught in both English and Spanish.

One of the other subjects taught at Northlands is French so this is where Maxima learned her conversational French skills.

Queen Maxima was overheard speaking in French to François Hollande, who was the President of France at the time.

She met him at an event in France alongside her husband.

You can see Queen Maxima speaking French with François Hollande in the video below:

Did you know? The fictional character James Bond can speak French as well as several other languages.

What Are Queen Maxima’s Views On Learning Languages?

Queen Maxima clearly thinks that speaking multiple languages is hugely important as she has ensured that her three daughters have grown up trilingual.

With the help of Argentinian and English nannies, Maxima ensured that her daughters learnt Dutch, English and Spanish naturally.

In the book ‘Amalia’ by Claudia de Breij which focuses on Maxima’s eldest daughter’s upbringing, Princess Amalia herself said that the changing languages of her nannies drove her crazy as a child but set her up well for her future role of Queen.

They even reportedly use Spanish to talk between themselves in public to make it harder for reporters to lip-read what they’re saying.

It may surprise you that Queen Maxima speaks 4 languages. It surprised us too!

It’s great to see that Maxima has put so much time and effort into learning Dutch, even before she officially joined the Dutch royal family.

Thanks for reading this post which answers the question ‘how many languages does Queen Maxima speak?’.