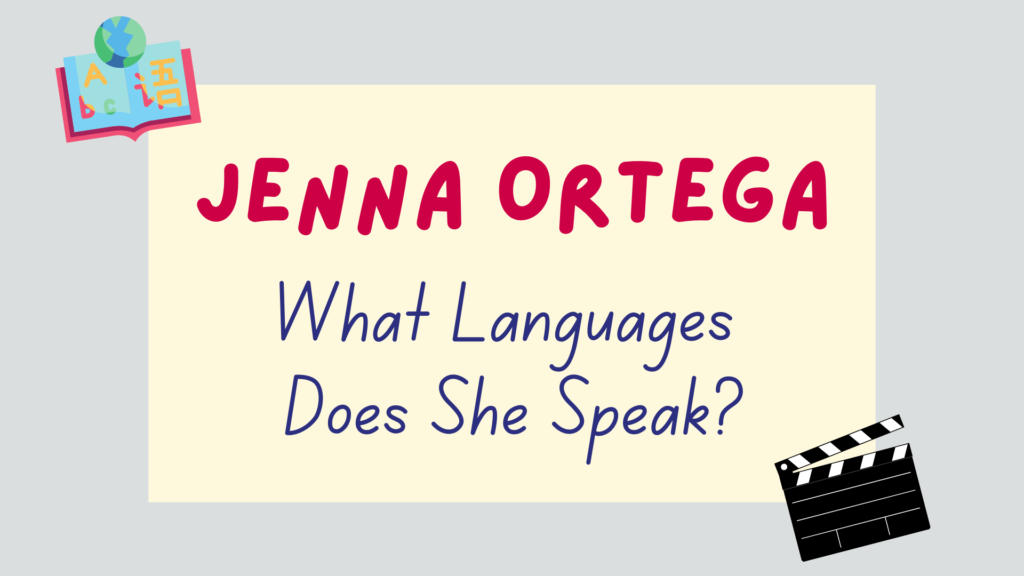 Jenna Ortega is an American actress that stars as Wednesday Addams in the Netflix show ‘Wednesday’ as well as young Jane in ‘Jane The Virgin’.

You may be wondering how many languages does Jenna Ortega speak?

She has a multicultural heritage so it’s natural to wonder if she also speaks multiple languages.

Don’t worry, we’ve got you covered. This post will go into detail on what languages Jenna Ortega speaks, how fluent she is in them and how she learned them.

What Languages Does Jenna Ortega Speak?

English is her first language as she was born and raised in California.

She attended English-speaking schools growing up and her parents mostly spoke to her in English.

No, Jenna Ortega cannot speak Spanish despite being of Latin descent.

Jenna Ortega was born in California in 2002. Her father, Edward Ortega, is of Mexican descent and her mother, Natalie Ortega, is half Mexican and half Puerto Rican.

It was actually Jenna’s grandparents that first came to the US from Mexico and Puerto Rico so Jenna’s parents actually grew up in the US too.

Due to her ancestry, Jenna Ortega is Latina however she cannot speak Spanish.

We know that Jenna can’t speak Spanish because she received a huge amount of backlash when a video of her trying to speak Spanish during an interview went viral on TikTok.

You can see this clip of Jenna Ortega speaking Spanish in the video below:

In the video, which received over 10 million views, Jenna is seen trying to encourage people in Latin America to watch her new TV show Wednesday (which is actually known as ‘Merlina’ in Latin America).

When trying to speak Spanish, she really struggles to get her words out and even has to repeat the Spanish words after someone else who says them for her first.

Even with someone giving her the words, she still stumbles over them.

The video clearly demonstrates that Jenna Ortega cannot speak Spanish at all.

This seemed to upset a lot of fans who claimed that she wasn’t really a Latina if she couldn’t speak Spanish.

Of course, this is nonsense. Jenna Ortega is still a Latina even if she doesn’t speak Spanish.

In fact, it’s sadly pretty common for the children of immigrants to not speak their parents native languages in the US.

Parents often want their child to fit in and they think that speaking English to them (instead of their native language) will help them get ahead and fit into society better.

Both of Jenna’s parents were actually born and raised in the US too. In an interview with PopSugar, Jenna said that her father doesn’t speak Spanish so teaching it to her and her siblings was a struggle.

She mentioned that her mom is bilingual in English and Spanish because her grandmother babysat her as a child and taught her Spanish.

Jenna said that the original plan was for her mom to speak Spanish to her and her siblings and her dad to speak English so they could learn both languages.

Unfortunately, it didn’t seem to work as Jenna can’t speak Spanish at all.

Jenna herself has said in the past that she is super proud to be Latina and actually grew up in Coachella Valley where there were lots of different kinds of Hispanic people.

She loved growing up there as she never felt ashamed of her background or afraid to show her culture.

In the hit Netflix TV show ‘Wednesday’ where Jenna Ortega portrays the lead role of Wednesday Addams, we see her speaking German.

Although it looks like Wednesday Addams can speak German, Jenna Ortega cannot.

Jenna learned how to read her lines in German for the TV show and likely worked with a dialect coach to get the pronunciation right.

Her German apparently wasn’t that great though with native German speakers saying that they couldn’t even understand what she said.

They had to read the subtitles along with all the other non-German speakers to understand.

You can see Jenna Ortega speaking German in the video below. It also includes an analysis by a native German speaker.

According to the analysis of her German by Herr Antrim, Jenna has a very thick American accent when speaking German which makes it very hard to understand what she’s saying.

Additionally she tries to speak really fast which has resulted in her squishing some words together that wouldn’t be squished together normally.

All in all, it doesn’t sound very natural and is actually very difficult for German speakers to understand.

It may come as a surprise to you that Jenna Ortega is a mostly monolingual speaker. It surprised us too!

It looks like Jenna hasn’t had much time for languages with her busy acting career.

Thanks for reading this post which answers the question ‘how many languages does Jenna Ortega speak?’.