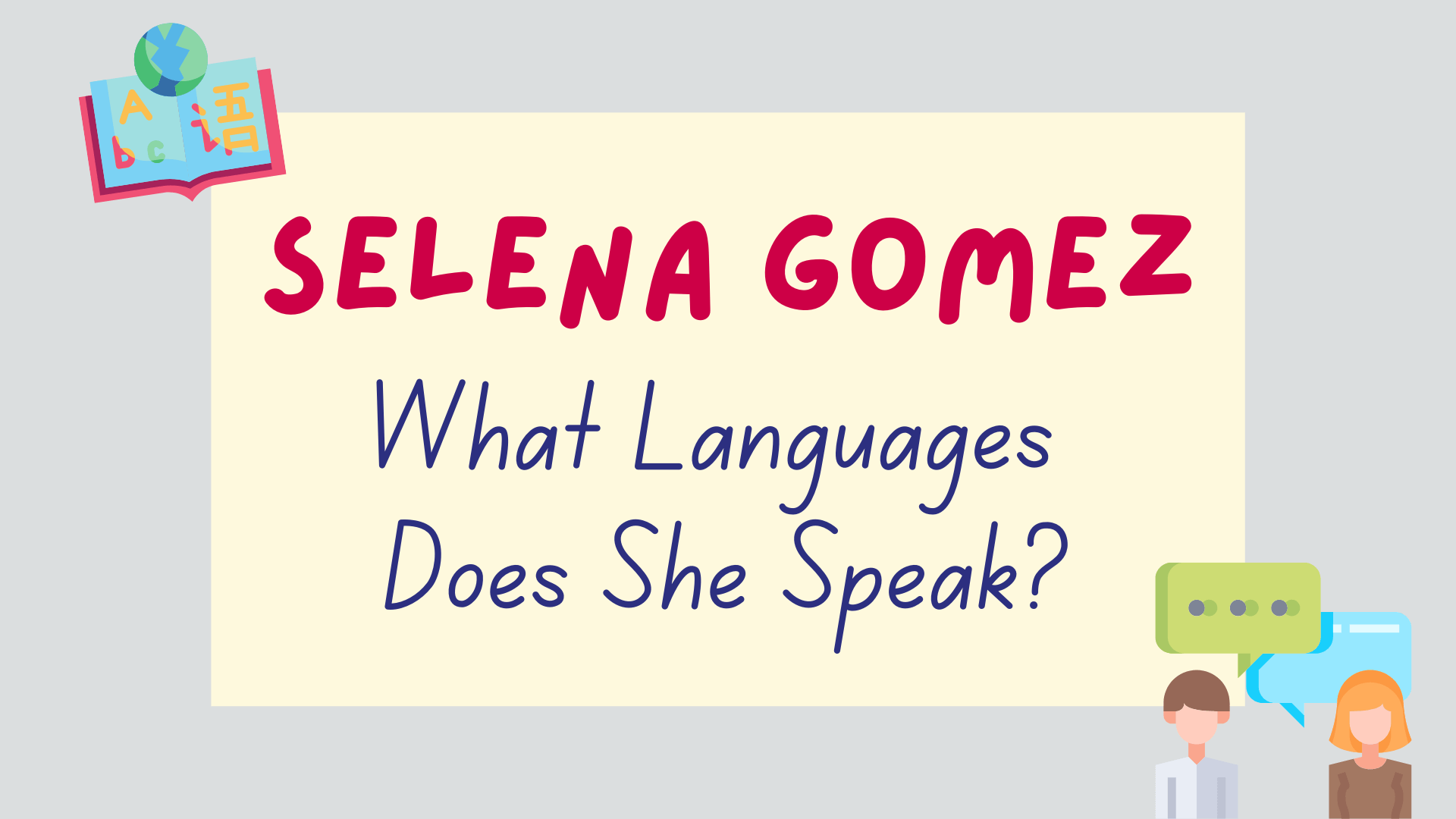 Selena Gomez is an American singer, actress and producer.

You may be wondering how many languages does Selena Gomez speak?

She has a mixed heritage, so it’s natural to wonder if she also speaks multiple languages.

Don’t worry, we’ve got you covered. This post will go into detail on what languages Selena Gomez speaks, how fluent she is in them and how she learnt them.

What Languages Does Selena Gomez Speak?

English is her first language as she was born and raised in Texas in 1992.

She mostly grew up with her mother, who speaks English natively, and attended English-speaking schools in the US so naturally English is Selena’s native tongue.

Yes, Selena Gomez can speak some Spanish but she isn’t fluent.

Selena Gomez is half Mexican. Her father, Ricardo Gomez, is of Mexican descent.

Selena’s paternal grandparents were originally from Monterrey in Mexico, but moved to Texas in the 1970s.

Selena’s parents separated when she was 5 years old and Selena then mostly stayed with her mom but shared weekends, holidays and quinceañeras with her father.

Selena picked up Spanish from her Mexican side of the family when she visited them as a child.

She said that she was fluent in Spanish until she started working at age 7, when her work took over her life. Her grasp of the language then slowly faded as she got older.

Although she isn’t fluent in Spanish anymore, she can still speak a little bit and understands Spanish very well.

As she mostly grew up living with her mother, who doesn’t speak Spanish, Selena wasn’t surrounded by the language that much which is likely why she doesn’t speak it fluently.

Selena Gomez is proud of her Mexican heritage, describing herself as a ‘proud third-generation American-Mexican’ and takes part in many famous Mexican traditions like quinceañeras.

Check out Selena Gomez speaking Spanish over the years in the video below:

Although Selena has admitted that she wishes she knew more Spanish, she has been seen using her Spanish skills in both her music and acting work.

In 2016, she starred in a Pantene commercial where she only spoke in Spanish.

Selena Gomez sang for the first time in Spanish back in 2010 when she released the single ‘Un Año Sin Lluvia’ which means ‘a year without rain’.

Prior to recording her Spanish EP, Selena hired a Spanish-language coach to help with her Spanish vocabulary and accent.

Selena mentioned that there was a ton of slang that she needed to learn, as Spanish changes generationally and she had mainly learnt Spanish from her grandparents and father.

Selena confessed that her grandmother is super proud whenever she sings in Spanish and always wanted her to record a Spanish song.

Selena Gomez can only speak basic Spanish but does understand it well.

A Spanish teacher analyzed Selena Gomez’s Spanish in a video and noted that ‘it’s clear that she doesn’t speak Spanish very well’.

In an interview with Despierta America, the interviewers ask Selena many questions in Spanish, she understands them all perfectly however she then responds in English.

Check out this Spanish interview in the video below:

When talking about it, she said that she can understand a whole conversation in Spanish but finds it hard to piece together a response back.

Selena has confessed that she wishes she knew Spanish better saying ‘I don’t know it very well because my dad’s side of the family, which is the Mexican side, they are in Texas and I’m always traveling and I’m working’.

She then went on to say that she does want to learn Spanish and become completely fluent. It’s a huge goal of hers and she’s already added it to her bucket list.

Many people think that Selena Gomez can speak the language because she is half Italian.

Selena’s mother was actually adopted and raised in Texas. She didn’t find out that she was Italian until later in life.

For this reason, Selena Gomez doesn’t actually have any Italian-speaking family, as her maternal grandparents are not Italian and her mother doesn’t speak the language.

Although she can’t speak Italian, we did once see Selena Gomez singing a little bit in Italian on her TV show Selena + Chef.

Check out Selena Gomez singing in Italian in the video below:

When asked in an interview on the French radio show NRJ if she knows any French words, Selena responded saying she only knows ‘bonjour’ and ‘je m’appelle Selena’.

You can see Selena Gomez speaking a little bit of French in the video below:

From the above video, it’s pretty clear that Selena Gomez cannot speak French.

She was mainly just saying very common French words or repeating things that other people had asked her to say.

It may come as a surprise to you that Selena Gomez is a mostly monolingual speaker. It surprised us too!

We love that Selena Gomez is so proud of her multi-cultural heritage and we can’t wait to hear her speaking more Spanish soon.

Thanks for reading this post which answers the question ‘how many languages does Selena Gomez speak?’.