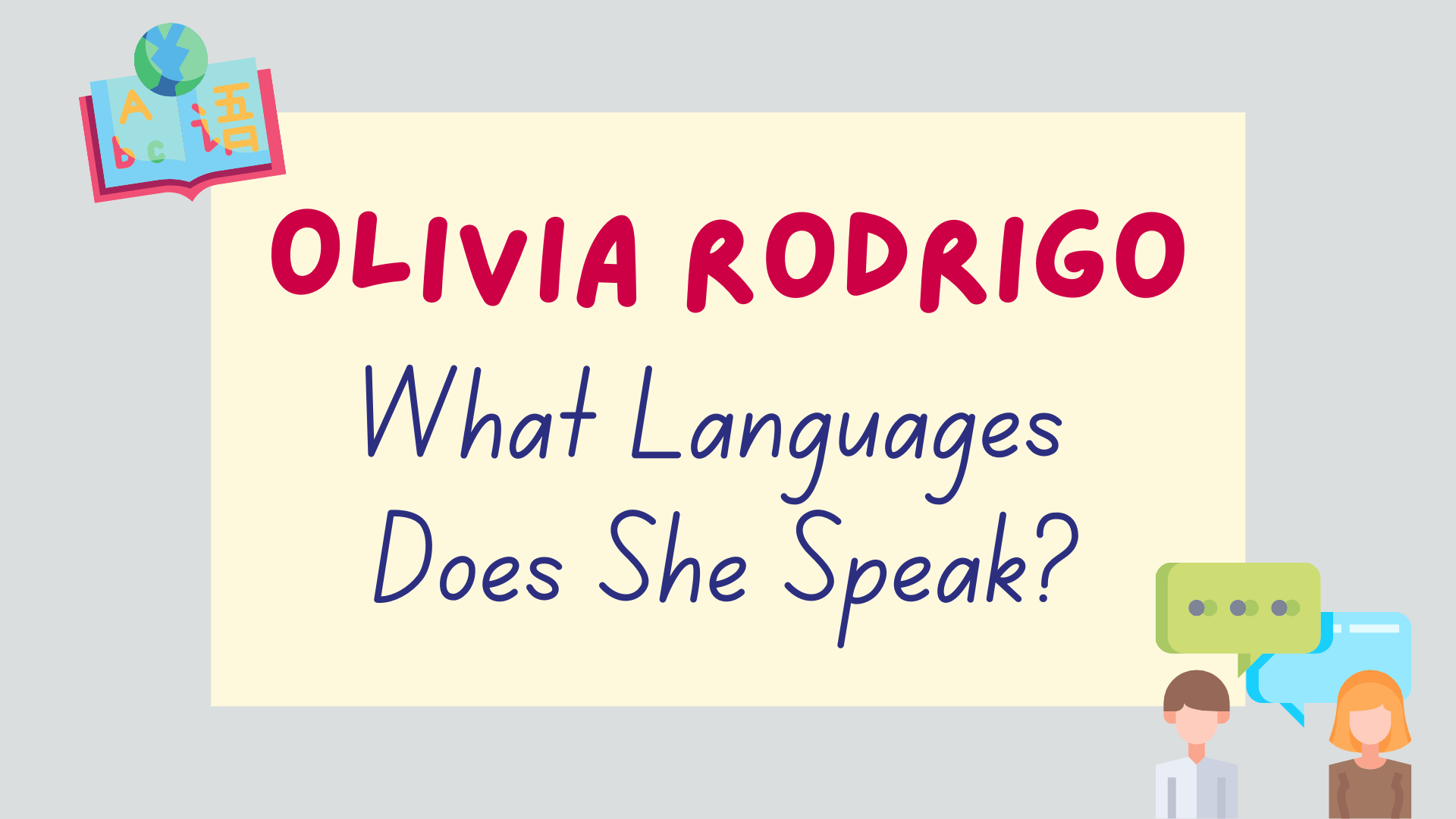 Olivia Rodrigo is an American singer, songwriter and actress who initially rose to fame in leading roles on Disney’s ‘Bizaardvark’ and ‘High School Musical: The Musical: The Series’. She has now branched into music.

You may be wondering how many languages does Olivia Rodrigo speak? She has a multicultural heritage and has had huge success so it’s natural to wonder if she also speaks multiple languages.

Don’t worry, we’ve got you covered. This post will go into detail on what languages Olivia Rodrigo speaks, how fluent she is in them and how she learnt them.

What Languages Does Olivia Rodrigo Speak?

English is her first language as she was born in Murrieta, California in 2003 to an English-speaking family. As she grew up in California, she is a native English speaker.

Does Olivia Rodrigo Know How To Speak Tagalog?

No, Olivia Rodrigo doesn’t speak Tagalog. Many people wonder if Olivia can speak Tagalog due to her Filipino heritage.

Olivia Rodrigo is half-Filipino. Her father is of Filipino descent whilst her mother is American with German/Irish ancestry.

Her Filipino family has been in the US for several generations as it was her great-grandfather that left the Philippines and came to the US when he was just a teenager.

Olivia opened up about her Filipino heritage in an interview as part of Asian Pacific American Heritage Month where she said that her family still follows some Filipino traditions such as making Filipino food.

As Olivia Rodrigo’s Filipino family have lived in the US for 4 generations now it seems very unlikely that she would speak Tagalog.

Additionally, in an interview with Live 95.5, Olivia was asked by the host the meaning of the word ‘tita’.

‘Tita’ is a Tagalog word meaning ‘aunt’ however Olivia responded saying she didn’t know what it meant indicating she doesn’t speak Tagalog. You can see this moment in the video below.

Olivia also mentioned in an interview that she has never been to the Philippines but would really like to as she has extended family there that she’s never met.

You can see Olivia Rodrigo speaking Tagalog in the video below. Although she doesn’t speak the language, she wanted to greet her Filipino fans by saying ‘how are you?’ in Tagalog.

Olivia Rodrigo does not speak Spanish.

People often think that Olivia Rodrigo has Latin American descent due to her surname ‘Rodrigo’. Olivia Rodrigo is not Latina, in fact, she is half Filipino.

This is because the Philippines was actually colonized by the Spanish back in 1565. This lasted until 1898 and during this time there was a lot of Spanish influence including many Filipino people being forced to take on Spanish surnames.

It may come as a surprise to you that Olivia Rodrigo is a monolingual speaker.

In fact, a YouGov survey estimated that around 75% of the US population only speak one language so maybe it’s not that surprising at all.

Thanks for reading this post which answers the question ‘how many languages does Olivia Rodrigo speak?’.