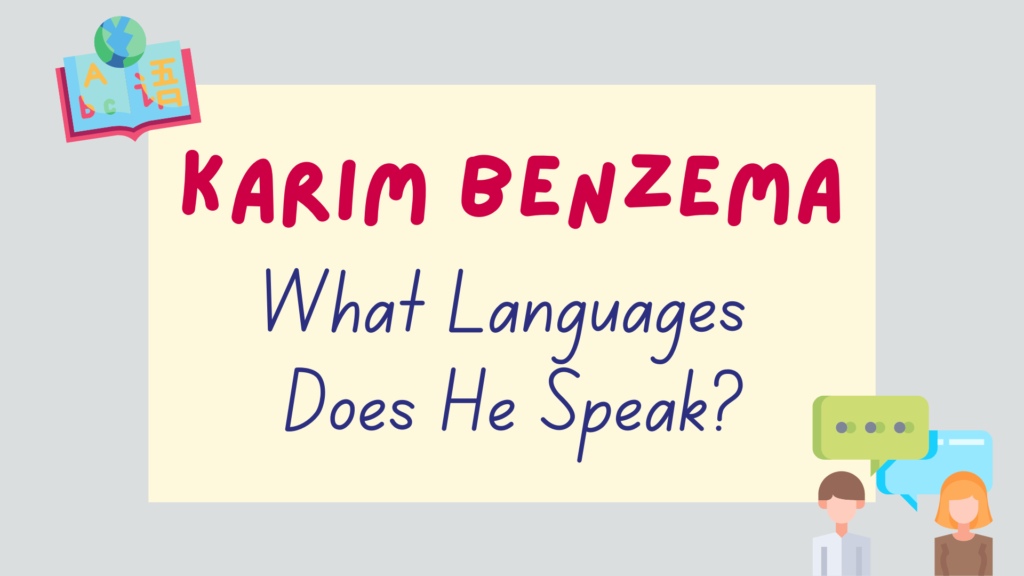 Karim Benzema is a professional football player who currently plays for Real Madrid and the French national team.

You may be wondering how many languages does Karim Benzema speak?

He has a multicultural background so it’s natural to wonder if he also speaks multiple languages.

Don’t worry, we’ve got you covered. This post will go into detail on what languages Karim Benzema speaks, how fluent he is in them and how he learned them.

What Languages Does Karim Benzema Speak?

Here’s his skill in each language:

Yes, Karim Benzema speaks French fluently as he was actually born and raised in France.

Karim Benzema was born in Lyon, France in 1987 and spent all of his childhood there.

At the age of 8, he began his football career in his hometown when he began playing for Bron Terraillon SC. A few years later, he joined Lyon’s youth academy.

Even though he now plays for Real Madrid, Benzema still plays for the French national team in international tournaments like the FIFA Men’s World Cup.

As Karim Benzema grew up in France and attended French-speaking schools, naturally his native language is French.

French is also the language he feels most comfortable speaking as he often uses it in interviews.

You can see Karim Benzema speaking French in the video below during an interview:

Yes, Karim Benzema can speak some English but he isn’t fluent.

There has been a lot of debate over the years on whether or not Karim Benzema can speak English. There are several videos online that appear to show conflicting evidence.

In 2013, the Real Madrid team were asked to record a video message for a charity event in English. Some of the players did however Karim Benzema didn’t even attempt it.

This video suggests that he didn’t speak any English back in 2013 as the video message was pretty simple.

It was just saying your name and that you support the charity game but he chose to do it in French instead.

More recently in 2022, Benzema took part in an internet Q&A where he responded to people’s questions about him.

The questions were submitted in a range of languages with some being in English. Benzema read the English questions in English however he then answered them in French.

From this video, it appears that Benzema can at least read and understand English, however as he responded to them all in French, it seems that he wasn’t confident enough to reply in English.

We know that Karim Benzema can definitely speak basic English as he was recorded in 2017 chatting with a fan.

The fan spoke to Benzema entirely in English and he clearly understood and managed to produce a few responses in English.

You can see Karim Benzema speaking English in the video below:

As you can see in the video, Benzema can clearly speak and understand some English as he was able to easily communicate with the fan.

Yes, Karim Benzema can speak Spanish fluently as he has lived in Spain for 13 years.

In 2009, it was announced that Benzema would be joining the Spanish football team Real Madrid. At this time, he didn’t speak a word of Spanish.

He initially signed a 6-year deal however, at the time of writing (Nov 2022), he still plays for the club.

After 4 months on the team, Benzema was criticized by the Spanish media for not yet starting to learn Spanish.

A month later, Benzema announced that he had started to learn Spanish and was attending Spanish lessons so that he could understand his teammates better.

You can see Karim Benzema speaking Spanish in the video below during an interview.

Spanish is the main language of communication used by the Real Madrid team and most players who join the team including Cristiano Ronaldo learn to speak Spanish.

After 13 years living in Spain and playing for a Spanish football club, Karim Benzema is now fully fluent in Spanish.

We saw him playing an impromptu game of ‘Guess Who’ with one of his teammates, Marcelo, a few years ago and the two appeared to have no problems communicating at all.

You can see this game in the video below:

Yes, Karim Benzema can speak some Arabic. His level of Arabic is unclear as he rarely speaks it publicly.

Although Karim Benzema was born in France, his parents are both of Algerian descent although they are also French nationals.

It was Benzema’s grandfather, Da Lakehal Benzema, who migrated from Algeria to Lyon back in the 1950s with his family.

Based on Benzema’s parents’ background, it’s likely that they could speak both Arabic and French fluently.

As Arabic is the main language spoken in Algeria, Karim Benzema may have grown up speaking this language at home with his family however he has never confirmed it.

You can see Karim Benzema speaking Arabic during an Eid video message in the video below:

As this was just a short video message, it’s unclear how good Karim’s Arabic is but he can clearly speak it a bit.

We did also see Karim Benzema take part in an Arabic interview in Kuwait.

During the interview, the interviewer gave the questions in Arabic however Benzema is seen using a translation earpiece and responds in Spanish rather than Arabic.

Although these are both dialects of Arabic, they are actually not very mutually intelligible meaning that someone who speaks one cannot understand the other.

This could explain why Karim is unable to do the interview in Arabic.

Did you know? Karim Benzema isn’t the only polyglot footballer. Mohamed Salah speaks several languages as does Romelu Lukaku.

It may surprise you that Karim Benzema speaks 4 languages. It surprised us too!

It’s great to see that Karim has managed to learn so many languages including Spanish as he has now lived in Spain for many years.

Thanks for reading this post which answers the question ‘how many languages does Karim Benzema speak?’.

Find out what languages Khabib speaks.