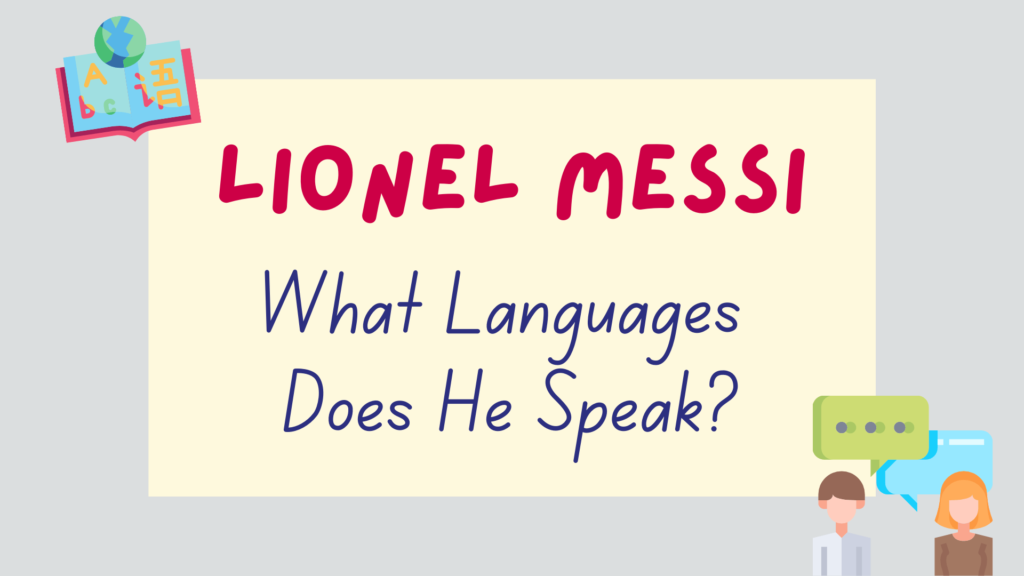 Lionel Messi is a professional football player. He is often considered to be one of the greatest players of all time.

You may be wondering how many languages does Messi speak? He has had huge success so it’s natural to wonder if he also speaks multiple languages.

Don’t worry, we’ve got you covered. This post will go into detail on what languages Messi speaks, how fluent he is in them and how he learnt them.

What Languages Does Messi Speak?

As he was born in Argentina and has spent most of his life living in Spain, naturally Messi’s native language is Spanish.

But that’s not the only language he can speak fluently…

As Messi has spent his entire life living in the Spanish-speaking countries Argentina and Spain, there was never a need for him to learn English.

Of course, it’s likely that he may be able to understand a few English phrases but  he can’t speak the language fluently.

Footballers tend to only learn English if they are signed at a club where English is the main spoken language, however Messi was never signed to an English-speaking club.

We know for sure that Messi doesn’t speak English because back in 2016 at the Ballon d’Or ceremony, Ronaldo was seen joking about having to act as a translator for both Messi and Neymar, neither of whom speak English.

This occurred again in 2019 during a joint interview with both Messi and Cristiano Ronaldo. The interviewer began by speaking to Ronaldo in English but tried to bring Messi into the conversation.

It was clear that Messi couldn’t understand so both the interviewer and Ronaldo switched to Spanish to include him in the interview.

Check out this moment in the video below:

In the past he has also been seen using a translator to interpret English for him.

It has been reported however that Messi’s wife, who is also from Argentina, speaks fluent English.

It seems though that his English skills have been improving in recent years.

In an interview in 2021 with a Spanish reporter, Messi was asked if he’d had time to learn English.

He replied saying he’d been learning English for a year and a half and also noted that he could understand English but couldn’t speak it.

Check out this interview in the video below:

Additionally, around the same time, a former teammate of Messi’s at Barcelona, Sergino Dest, said that he had heard Messi speaking in broken English.

Based on this, maybe we will see Messi speaking English soon!

We did briefly see Messi speaking a little bit of English whilst speaking with a referee at one of his games.

Check out Lionel Messi speaking English in the video below:

Messi was born in 1987 in the city of Rosario in Argentina. As Spanish is the main language spoken in Argentina, naturally this became Messi’s first language.

Although he was born and raised in Argentina, at age 13, he moved with his family to Barcelona when he was signed by the FC Barcelona youth football team.

Since then he has been living in Barcelona, Spain where Spanish is also spoken.

It has been noted that when speaking Spanish, Messi speaks with a distinct Argentinian accent as he has always maintained close ties with his hometown of Rosario in Argentina.

In pretty much every single interview he has ever given, Messi speaks in Spanish so it’s clear that he feels most comfortable speaking in Spanish.

You can see Lionel Messi speaking Spanish in the video below:

Did you know? Messi isn’t the only footballer that knows Spanish. Karim Benzema had to learn Spanish when he joined Real Madrid.

As Messi has lived in Barcelona since he was 13 years old, he speaks Catalan fluently.

Barcelona is located in the Catalonia region of Spain where Catalan is widely spoken.

Barcelona actually has 2 official languages – Spanish and Catalan. In fact, most people in Barcelona are bilingual and can speak both languages.

There are approximately 6 million speakers of Catalan across Catalonia, Andorra, the Balearic Islands and parts of France.

Additionally, Messi does have some family that live in Catalonia. These family members, who would speak fluent Catalan, actually helped to arrange his trial with FC Barcelona.

Messi would have been able to pick up Catalan fairly easily after moving to Barcelona at age 13 as he was still fairly young and Catalan shares many similarities with his native tongue Spanish.

Messi was once asked about his Catalan skills in an interview. When asked if he speaks Catalan at home he said ‘yes, the little one, he says a lot of things. Thiago less. I understand it all.’

In this answer he refers to his 2 sons, Mateo and Thiago, who were both born and raised in Barcelona so they likely speak Catalan natively alongside Spanish.

Whilst we’ve never actually seen Messi speaking Catalan in interviews, it has been reported that he converses with the other members of the FC Barcelona team in Catalan during training.

It has also been argued that it could be a tactical advantage for the Barcelona team to speak to each other in Catalan during matches as the other team wouldn’t be able to understand.

The only time we’ve seen Messi speaking Catalan was back in 2009 when the Barcelona team were celebrating their La Liga title with an open-top bus parade.

Check out Messi speaking Catalan in the video below:

In an interview previously, Messi also stated that he can speak Catalan but he prefers to speak Spanish.

As Messi is from Argentina, his native language is Spanish not Portuguese.

In fact, the main language for most countries in South America is Spanish.

As Messi has never lived or spent much time in Brazil, he has never needed to learn Portuguese.

In 2021, Messi was signed by the French football club Paris Saint-Germain (PSG) however at present, he still doesn’t speak French.

It was reported that prior to his move to PSG, Messi and his wife started taking some French lessons to prepare for the move.

Messi has initially signed a 2-year deal with PSG but this could easily be extended for a few more years.

After spending several years in Paris, it’s likely that Messi will improve his command of the French language and will probably continue taking French lessons.

What Are Messi’s Views On Learning Languages?

As Messi has invested most of his time into his football career, it’s not surprising that he doesn’t have much time left over for learning languages.

His fluency in Catalan shows that he is definitely capable of learning other languages but has never needed to learn any others.

Messi did once appear in a Japanese commercial for a face wash where he actually spoke a little bit of Japanese.

Check out Lionel Messi speaking Japanese in the video below:

Of course, it’s clear that Messi doesn’t speak Japanese and just learned this phrase for the commercial.

It’s not surprising that Messi hasn’t had much time for languages as he has dedicated most of his life to football and who can blame him really.

Thanks for reading this post which answers the question ‘how many languages does Lionel Messi speak?’.