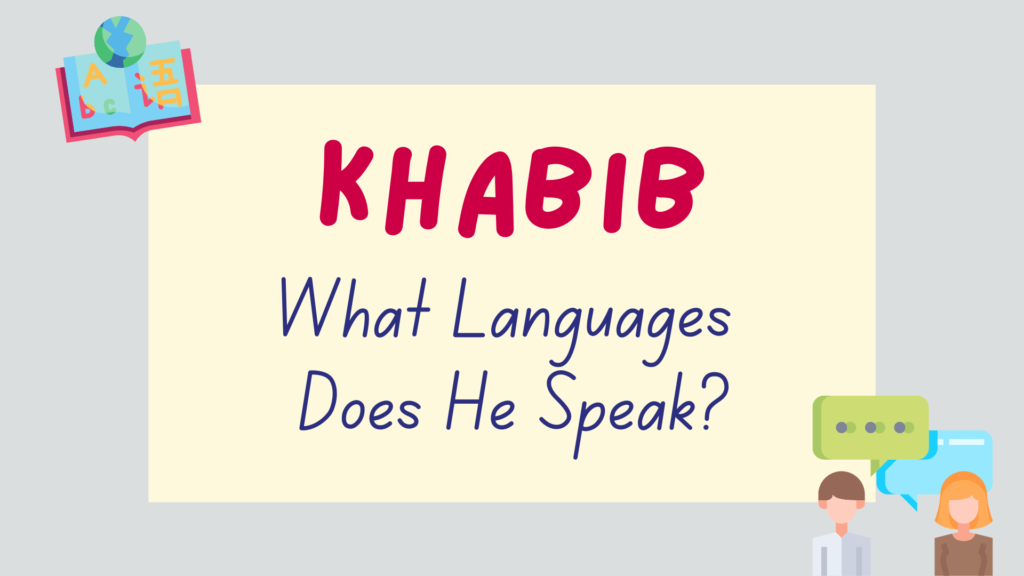 Khabib Nurmagomedov is a former professional mixed martial artist (MMA) who competed in the UFC.

You may be wondering how many languages does Khabib speak?

He has had huge success so it’s natural to wonder if he also speaks multiple languages.

Don’t worry, we’ve got you covered. This post will go into detail on what languages Khabib speaks, how fluent he is in them and how he learned them.

What Languages Does Khabib Nurmagomedov Speak?

Khabib confirmed the languages that he speaks during a joint press conference with Conor McGregor.

During a heated argument with McGregor, Khabib listed the languages he speaks after he accused McGregor of not speaking his own country’s language (Irish).

Yes, Khabib can speak Russian fluently as he was actually born and raised in Russia.

Khabib was born in the village of Sildi which is located in Dagestan, Russia in 1988.

Sildi is a tiny village which only has just over 200 residents and is located within the Caucasus mountains.

It was in his home country of Russia where Khabib started wrestling at age 5. In fact, it’s actually super common for children in Dagestan to begin wrestling from a young age.

He even reportedly wrestled a bear at age 9 as part of his training.

As Khabib has spent most of his life living in Russia, it’s no surprise that he can speak Russian fluently.

He speaks it with a Dagestani accent and uses it often in interviews with the Russian press.

You can see Khabib speaking Russian in the video below:

Although over 100 languages are spoken in Russia, the main language of communication is Russian.

Russian is used on TV, by the government and in most schools so Khabib learned the language as a child.

In a video about his education, Khabib admitted that he actually didn’t learn Russian until he was 7 or 8 years old as this was when his family moved to Makhachkala (capital of Dagestan).

Yes, Khabib can speak Avar fluently as he was born to an Avar family and grew up in an Avar-speaking village.

Khabib was actually born to an Avar family which is an ethnic group that resides in Dagestan who live in ancient villages usually 2,000m above sea level.

Although they live in Russia, their primary religion is actually Islam and has been since the 13th century.

The Avar people actually have their own language called Avar which is a Northeast Caucasian language.

Avar is Khabib’s native language as it was the main language spoken by his family growing up.

Khabib once said that everyone in his village spoke Avar which is why he didn’t learn to speak Russian until he was 7 or 8 years old.

When he moved to Makhachkala at age 7 or 8, he had to learn Russian as people didn’t speak Avar there.

You can see Khabib speaking Avar a little bit amongst his friends in the video below:

There are approximately 1 million speakers of Avar who primarily live in Dagestan but there are some other speakers in other parts of Russia.

It is written in the Cyrillic script (the same as Russian). UNESCO currently classifies Avar as vulnerable to extinction.

Yes, Khabib can speak some Arabic as he is a devout Muslim.

Khabib is a Sunni Muslim and is known to be very dedicated to his religion. As part of his faith, he learned some Classical Arabic as traditionally the Quran is written in Arabic.

Many Muslim children learn to read Arabic as a child in order to read the Quran so it’s likely that Khabib did too.

Classical Arabic actually used to be the lingua franca in Dagestan before Soviet times so many people in the area speak it to a certain extent.

Khabib’s father also once confirmed in an interview that Khabib speaks Arabic but is too shy to use it in public.

Additionally the name ‘Khabib’ is of Arabic origin. It actually means ‘beloved’ in Arabic and was likely chosen by his parents for its meaning and connection to the Islamic faith.

Based on this, it’s likely that Khabib can read Arabic well and speak it a bit but he probably isn’t fully fluent.

There aren’t any videos of Khabib speaking Arabic apart from the odd word here and there like ‘As-salamu alaykum’.

Yes, Khabib can speak English pretty well. He learned English for his career as a professional MMA fighter.

As part of his MMA career, Khabib often takes part in press conferences where he usually speaks English.

We saw Khabib take part in a joint press conference with Conor McGregor in 2018 where Khabib spoke pretty fluent English. We saw the two having a pretty heated argument.

Khabib learned English for his MMA career. He mentioned in an interview that he knew you needed to speak English if you wanted to be a big star.

You can see Khabib speaking English in the video below during an interview about an upcoming fight:

As you can see in the video, Khabib can definitely speak English but his English is far from perfect.

He can get his point across but he generally only uses simple language and makes many mistakes. He also has a very thick accent.

Khabib admitted once that he prefers speaking Russian over English as he finds it difficult to express himself fully in English.

Yes, Khabib speaks some Turkish but he isn’t fluent.

Khabib confirmed himself that he speaks Turkish during the joint press conference with Conor McGregor in 2018.

According to Khabib’s father, he learned to speak Turkish in school and actually excelled in this class.

The Dagestan region in Russia where Khabib is from is actually pretty close to Turkey which may be why his school taught the language.

Additionally, there are many Turkish-speaking people living in the Dagestan region.

You can see Khabib speaking Turkish in the video below. He says ‘how are you? My name is Khabib, what is your name?’

This video indicates that Khabib doesn’t speak Turkish fluently but he does know some words and phrases in the language.

His choice of words is a little strange and suggests that he doesn’t know much Turkish.

Khabib has never mentioned being able to speak Spanish and there are no videos of him speaking it.

It may surprise you that Khabib speaks 5 languages. It surprised us too!

It’s great to see that Khabib has put in the effort to learn so many languages over the years even with a busy training schedule that started from a very early age.

Thanks for reading this post which answers the question ‘how many languages does Khabib speak?’.