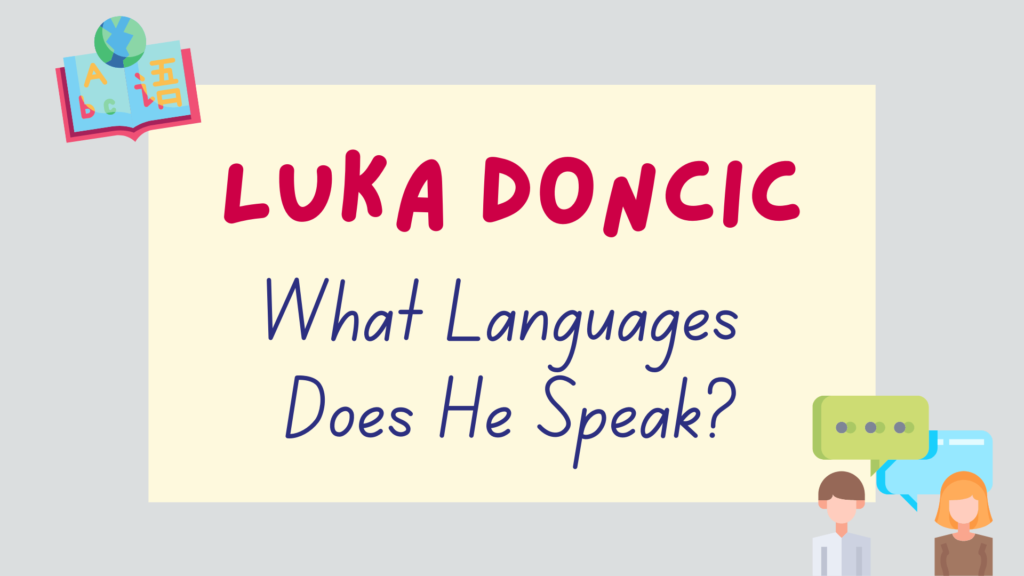 Luka Doncic is a professional basketball player who currently plays for the Dallas Mavericks in the NBA.

You may be wondering how many languages does Luka Doncic speak?

He has had huge success and has lived in several different countries so it’s natural to wonder if he also speaks multiple languages.

Don’t worry, we’ve got you covered. This post will go into detail on what languages Luka Doncic speaks, how fluent he is in them and how he learned them.

What Languages Does Luka Doncic Speak?

Slovenian is Luka Doncic’s first language as he was born in Ljubljana, Slovenia in 1999 to a Slovenian family.

Slovenia lies in central Europe next to Croatia, Austria and Italy and was once part of the former country Yugoslavia.

The main language spoken there is Slovenian.

Although he left Slovenia at age 13 to focus on basketball, he does still return often and plays for the Slovenian national team.

Luka Doncic doesn’t use his native Slovenian as much anymore but it looks like some other basketball players have taken the time to learn some of his language.

Back in 2020, Kobe Bryant showed up to one of Luka’s games and jokily trash-talked him in Slovenian from the sidelines.

Additionally, Shaq tried to learn a little bit of Slovenian to say ‘bye’ to Luka after he gave a post-game interview with ‘Inside the NBA’.

Check out this moment in the video below:

You can see Luka Doncic speaking Slovenian in the video below during a virtual press conference:

Yes, Luka Doncic can speak Spanish. He learned the language when he moved to Spain to play for Real Madrid.

In 2012 when he was just 13 years old, Doncic sighed a 5-year contract with Real Madrid.

He then moved to Madrid, Spain and started living with other football and basketball prospects.

During his time in Spain, he initially played for the Real Madrid basketball youth team and was a stand-out player who regularly won the Most Valuable Player award.

He was then promoted to their senior team at age 16 where he became the youngest-ever person to play for Real Madrid.

It was reported in 2019 during a game against Detroit that was taking place in Mexico City, fans could be heard cheering loudly for the Dallas Mavericks.

Doncic even introduced himself to the crowd in Spanish with the fans responding gleefully with ‘MVP!’.

Even after leaving Spain, Doncic still uses his Spanish skills often and regularly gives interviews in Spanish even after moving to the US.

He has also been spotted chatting to other Spanish-speaking players, like Kristaps Porzingas, about strategy in Spanish as both of them have played for a Spanish team in the past.

Here’s Luka speaking a bit of Spanish with a reporter after one of his games:

After living in Spain for 6 years, Spanish is without a doubt his second-best language after Slovenian.

He speaks it very fluently and given the fact he still regularly uses it today in the US, it’s unlikely that he will forget it.

He even admitted in an interview that his Spanish is better than his English (which is also pretty fluent).

This makes sense since he moved there at age 13 so he was just young enough to learn the language naturally and really pick up the accent and sound like a native.

You can see Luka Doncic speaking Spanish in the video below:

Yes, Luka Doncic can speak fluent English. He learned English in school but become fully fluent after moving to the US.

In 2018, Doncic was drafted by the Dallas Mavericks team and he began playing in the NBA.

At this point, he moved to the United States.

Prior to moving to the US, Luka Doncic could already speak English as he learned it in school.

Slovenia actually ranks as one of the top European countries for knowledge of foreign languages.

English is one of the most commonly taught languages along with Serbo-Croatian, Spanish, French and German.

Doncic can speak English with reasonable fluency however he is still learning.

As an example, in a 2018 interview with SB Nation, he didn’t know the word for ‘shower’.

In another interview, he asked the interviewer to speak in ‘normal English’ as he didn’t understand words like ‘adversity’ and ‘substantial’.

This highlights that he was far from fluent at the time however it’s been several years since these interviews so he’s likely improved his English significantly since then after living in the US for several years.

These days he does speak English pretty fluently and only has a slight Slovenian accent.

Check out Luka Doncic speaking English more recently in the video below:

Although Luka Doncic is Slovenian, his father actually has Serbian descent although he too was born in Slovenia.

It’s actually really common for people in Slovenia to speak one of the Serbo-Croatian languages. In fact, the majority of people do.

This is mainly due to the history of the region with countries including Slovenia and Serbia both being a part of the former Yugoslavia.

We even saw Luka Doncic singing a Serbian folk song alongside teammate Boban Marjanovic so it’s clear that he speaks Serbian and understands Serbian culture well.

Check out Luka Doncic singing in Serbian in the video below:

You can see Luka Doncic speaking Serbian in the video below during a virtual interview:

What Are Luka Doncic’s Views On Learning Languages?

Languages, without a doubt, have been super important to Luka Doncic over the years and have helped him assimilate into different environments.

It seems that Luka Doncic picked up most of his language skills out of necessity.

He learned several languages in school but became fully fluent after living in countries that speak those languages.

For example, he became fluent in Spanish after moving to Spain at age 13.

It’s also worth remembering that in countries like Slovenia, it is actually really common for people to speak more than one language.

It’s actually rarer to not speak more than one language in Slovenia so naturally, Luka has grown up speaking several different tongues.

Impressively, Luka Doncic can switch between his 4 languages with ease.

He once did a virtual interview where he answered questions in all 4 of his different languages. Impressive, right!?

It may surprise you that Luka Doncic speaks 4 languages. It surprised us too!

We’re super impressed that Luka Doncic can speak so many different languages, especially seeing as he’s been so dedicated to basketball from such a young age.

Thanks for reading this post which answers the question ‘how many languages does Luka Doncic speak?’.