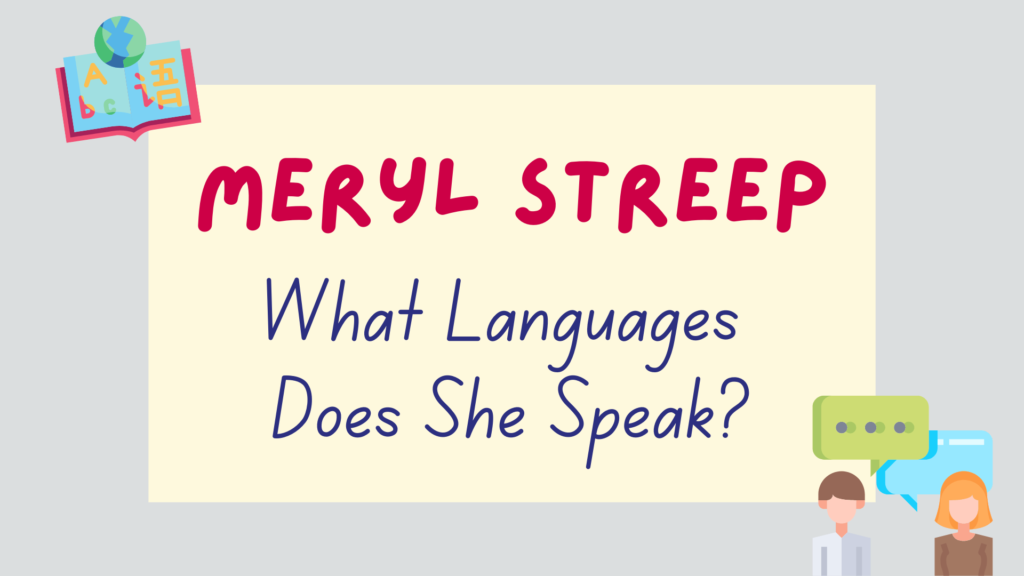 Meryl Streep is an American actress who has won numerous awards including 8 Golden Globe awards and 3 Oscars.

You may be wondering how many languages does Meryl Streep speak?

She has had huge success so it’s natural to wonder if she also speaks multiple languages.

Don’t worry, we’ve got you covered. This post will go into detail on what languages Meryl Streep speaks, how fluent she is in them and how she learned them.

What Languages Does Meryl Streep Speak?

English is her first language as she was born in New Jersey and raised in the US.

Her parents were both Americans and spoke English natively so naturally, Meryl also grew up speaking English as her first language.

English is the only language that she’s fully fluent in.

Yes, Meryl Streep can speak a bit of Italian.

You can see Meryl Streep speaking Italian in the video below:

Meryl said in a speech she gave in Italian at the premiere of her movie ‘The Post’ that she studied Italian for one year whilst at university.

She definitely isn’t fluent as when she gave the speech on stage in 2018, she forgot the word for ‘welcome’ and had to ask someone.

She also commented saying ‘my accent is better than my grammar’. She also once admitted that she doesn’t speak much Italian anymore because she’s ‘old and forgetful’.

Given the fact that Meryl learned Italian back in university which was over 50 years ago now, it’s hardly surprising that she doesn’t speak it much anymore.

She likely hasn’t had much chance to practice it over the years and as with any skill, if you don’t use it, you’ll lose it.

In 1982, Meryl Streep starred as a Polish Auschwitz survivor named Sophie in the movie ‘Sophie’s Choice’.

To ensure that her accent was spot-on, Meryl decided to learn Polish. She felt that if she learned Polish then the Polish accent would come easy to her and would sound more authentic.

She spent 5 to 6 hours a day with a teacher for months learning Polish prior to filming in order to become fluent.

She confirmed this in an interview ​​at the Chancellor’s Speaker Series at UMass Lowell.

You can see the interview in the video below where Meryl discusses her inspiration for her Polish accent:

Her hard work paid off as she received a lot of praise for her perfect Polish accent and even won several notable awards for her performance.

As a method actor, Meryl always tries to dig a little deeper into her characters and tries to get inside their minds.

By learning the language and perfecting the accent, she could really portray the character to the best of her ability.

You can see Meryl Streep speaking English with a Polish accent in the movie ‘Sophie’s Choice’ in the video below:

You can see Meryl Streep speaking Polish in the video below:

Native Polish speakers have noted that when she speaks Polish, she has a heavy Russian accent.

This may be due to her not completely perfecting her accent or potentially she may have had a Russian teacher.

Although reportedly Meryl was fluent in Polish at the time of filming, this film came out 40 years ago so it’s unlikely that Meryl still speaks Polish fluently.

She probably hasn’t had much chance to practice Polish since filming this movie so her fluency has likely waned considerably.

Meryl Streep does have some German and Swiss ancestry on her father’s side.

Her father, Harry Streep Jr., was of German and Swiss descent.

Meryl’s great-great-grandfather, Gottfried Streeb, had immigrated to the US from Loffenau in Germany. He later changed their surname to ‘Streep’.

Another line of her father’s family came from Giswil in Switzerland.

Although she has some German heritage, her family don’t speak German.

Streep did pick up some German when she filmed ‘Sophie’s Choice’ as her character could speak German.

Meryl filmed several scenes where she spoke what appeared to be flawless German.

Meryl learned to speak German with a Polish accent as that is how her character Sophie (who was Polish) would have spoken German.

You can see Meryl Streep speaking German in the video below which is a scene from the ‘Sophie’s Choice’ movie:

As you can see, she speaks German with a strong Polish accent.

It may surprise you that Meryl Streep speaks 4 languages. It surprised us too!

We’re super impressed with Meryl’s dedication to her roles. Learning an entire language just for one role is certainly no easy feat but Meryl pulled it off flawlessly.

Thanks for reading this post which answers the question ‘how many languages does Meryl Streep speak?’.