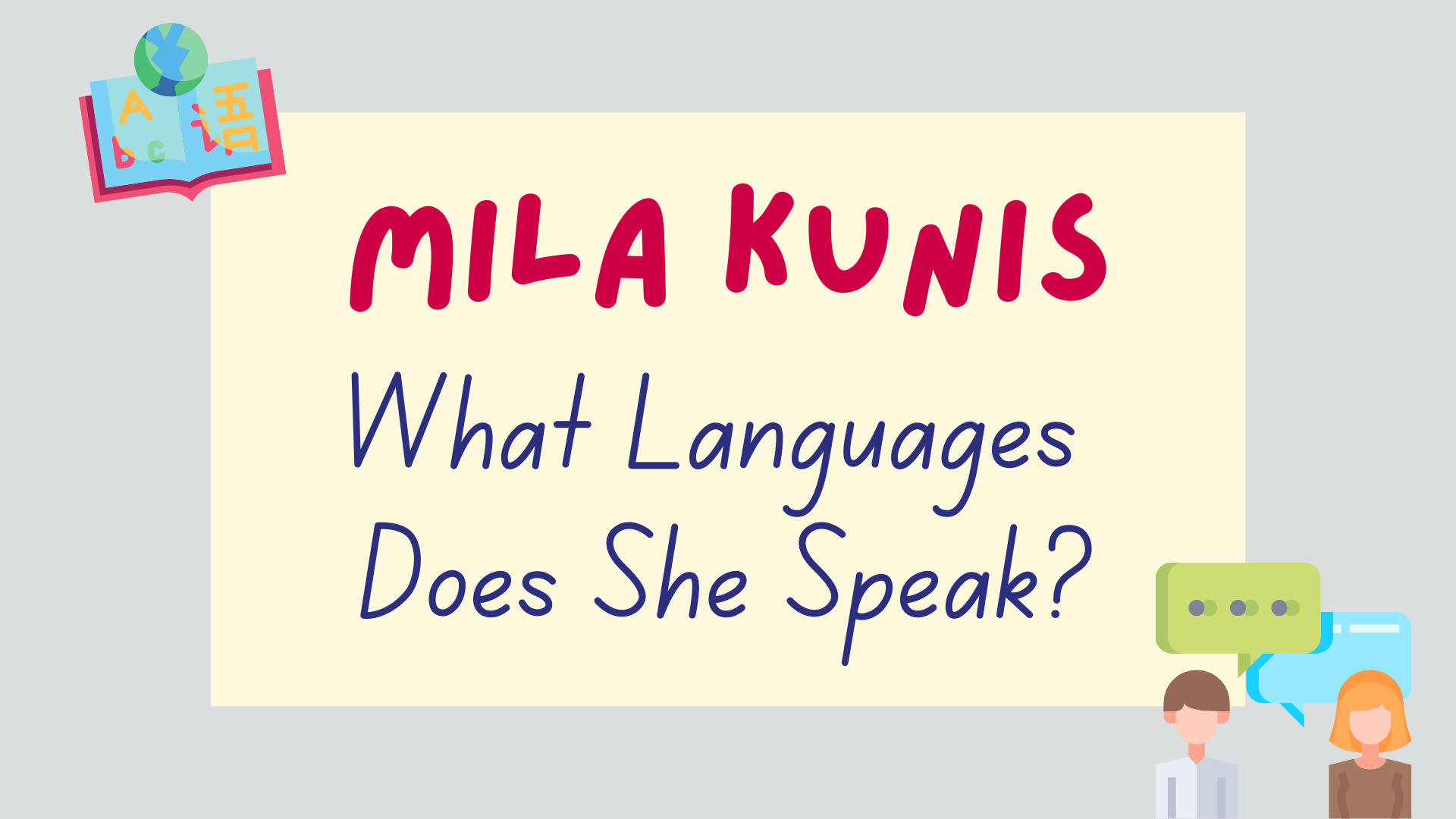 Mila Kunis is an American actress. She is best known for starring in ‘That ‘70s Show’, ‘Ted’, ‘Bad Moms’ and ‘Forgetting Sarah Marshall’.

You may be wondering how many languages does Mila Kunis speak? She wasn’t born in the US and has had huge success in Hollywood so it’s natural to wonder if she also speaks multiple languages.

Don’t worry, we’ve got you covered. This post will go into detail on what languages Mila Kunis speaks, how fluent she is in them and how she learnt them.

What Languages Does Mila Kunis Speak?

Mila Kunis speaks 3 languages fluently. Mila Kunis speaks English and Russian. The 3rd language that Mila speaks is not known however it’s likely either Spanish or Ukrainian (more on this later).

Mila Kunis can speak English to a native level but this wasn’t always so.

Mila was born in the city of Chernivtsi in 1983. This city was a part of the Soviet Union at the time but is now part of Ukraine.

Her family fled the Soviet Union when she was 7 years old and moved to the US. At this point, she didn’t speak any English.

Mila has showcased her impressive Russian skills in several interviews. You can hear Mila Kunis speaking Russian in the interview below where she was promoting the film ‘Ted’:

Mila has admitted before that she can’t read Russian despite speaking it fluently. She has also said that most of her American friends consider Russian a harsh language and that people have compared it to Klingon before because she sounds angry when speaking.

Whilst promoting her movie ‘Friends with Benefits’ at a press conference in Russia, Mila famously defended her co-star Justin Timberlake from the Russian media in her native Russian.

A reporter asked Justin why he had given up music for acting. Mila quickly jumped to his defense saying ‘Why movies? Why not? What kind of question is that? Why are you here?’ in fluent Russian.

Check out Mila Kunis speaking Russian to defend Justin in the video below:

Mila also speaks Russian at the end of an episode of the animated TV show ‘Family Guy’ in which she voices the character Meg.

Mila has stated that she is keen to keep her heritage alive through her children. She revealed on the Ellen DeGeneres Show that she wants her children to speak Russian.

She also revealed that her husband, Ashton Kutcher, has started taking Russian lessons so he can speak to their children in Russian too.

In an interview with MTV, Mila also said she is considering sending her kids to a Russian pre-school.

How Did Mila Kunis Learn English?

When Mila was 7 years old, her parents fled the Soviet Union and arrived in the United States. As Mila comes from a Jewish family, the family feared antisemitism in the Soviet Union. They also saw no future for their children there so they left.

When Mila arrived in Los Angeles, her parents enrolled her in school. At this point she didn’t speak a word of English. She has later described this experience as being ‘deaf and blind at age 7’.

Mila quickly picked up the language though as today she sounds like a native English speaker and has an American accent.

In an interview on ‘Conan on TBS’, she said that within 2 years of living in the US she spoke pretty good English with no Russian accent. It was at around this time, when she was 9 years old, that she started her acting career initially starring in commercials.

What Are Mila Kunis’s Views On Learning Languages?

Mila definitely has a keen interest in learning languages.

Her husband, Ashton Kutcher, revealed that their daughter, Wyatt, at age 2 can already speak and understand English and Spanish and also has a grasp of Russian.

It’s thought that Mila Kunis can speak a little bit of Spanish as back in 2019, Aston Kutcher shared a video of him and Mila singing a Spanish nursery rhyme to their kids. The song was ‘La Vaca Loca’.

It’s unclear if Mila can speak Spanish fluently or not as she hasn’t publicly confirmed it. Mila has spent the majority of her life in Los Angeles where Spanish is a widely spoken language so it wouldn’t be surprising if she had learnt it.

Mila can definitely speak a third language as during an interview where she was promoting the movie ‘The Spy Who Dumped Me’, Mila said that she would be a good secret agent because she speaks 3 languages.

She didn’t confirm which other language she speaks but it’s likely that she speaks either Spanish or potentially Ukrainian.

As Mila Kunis was born in Ukraine (Soviet Union at the time), she could potentially also speak the Ukrainian language as well as Russian. Most people who live in Ukraine speak both Ukrainian and Russian so this wouldn’t be surprising.

It may surprise you that Mila Kunis speaks 3 languages. The identity of the 3rd language she speaks is still a mystery.

It’s also great to hear that Mila Kunis is planning on teaching her children her native tongue.

Thanks for reading this post which answers the question ‘how many languages does Mila Kunis speak?’.