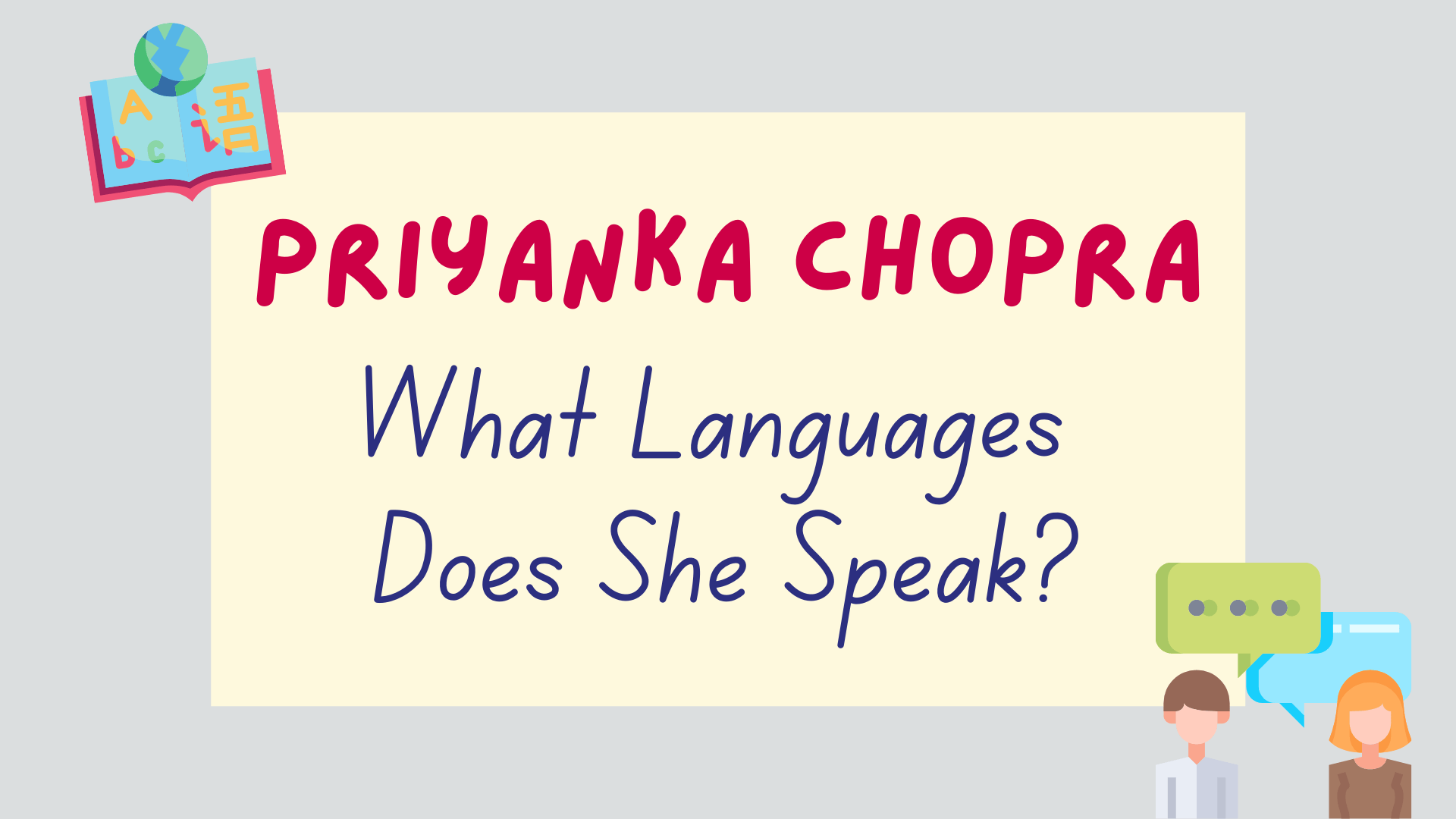 Priyanka Chopra is an Indian actress, model and singer. She has starred in many hit Bollywood movies and has also expanded into American film and television.

You may be wondering how many languages does Priyanka Chopra speak? She has starred in films in different languages and has had huge success so it’s natural to wonder if she also speaks multiple languages.

Don’t worry, we’ve got you covered. This post will go into detail on what languages Priyanka Chopra speaks, how fluent she is in them and how she learnt them.

What Languages Does Priyanka Chopra Speak?

She once stated that she can also ‘fake a few more’ languages including Spanish and French.

Priyanka Chopra was born in Jamshedpur, India in 1982 to Indian parents so Hindi was her first language, alongside English.

Priyanka continued to live in India, moving all over the country due to her parent’s work in the Indian Army, throughout her childhood.

You can hear Priyanka Chopra speaking Hindi in the video below. This video is from an interview that Priyanka gave after receiving the Padma Shri Award.

As you can see in the video, Priyanka Chopra speaks fluent Hindi as she has lived in India most of her life.

Priyanka has also starred in over 50 Bollywood movies, most of which are in Hindi so she definitely uses this language a lot in her everyday life.

How Did Priyanka Chopra Learn To Speak English?

She discussed her English in an interview with Chelsea Handler saying that English is actually one of her first languages, along with Hindi.

She grew up speaking the language and was likely taught English in school from a young age.

It’s actually pretty common for Indian people to speak fluent English. In fact, India is the second-largest English-speaking country in the world with around 125 million English speakers, that’s 10% of their population.

Priyanka did also move to the US for 4 years when she was 12. She stayed with her aunt’s family and attended schools in the US before moving back to India.

Whilst attending US schools for 4 years, she would have been taught completely in English.

When speaking English, Priyanka Chopra does speak with a slight Indian accent but she sounds more American these days. This is likely due to her spending a lot of time in the US and having an American husband.

You can hear Priyanka Chopra speaking English in the video below during an interview with Seth Meyers.

She has stated that when she is arguing with her husband, Nick Jonas, her accent becomes more Indian and he has trouble understanding her.

Find out what languages Nick Jonas speaks too.

What Other Languages Does Priyanka Chopra Speak?

Whilst Priyanka can only speak Hindi and English fluently, she does also have some knowledge of other languages.

When asked how many languages she speaks, Priyanka said she can fluently speak Hindi and English but she can fake a few more.

Priyanka can definitely speak some Marathi which is the language of Maharashtra, India.

Priyanka lives in Mumbai (which is in Maharashtra) and has done so for many years so it makes sense that she can speak a bit of this language.

You can hear Priyanka Chopra speaking Marathi in the video below. Priyanka spoke some Marathi at the launch of a Marathi film.

Priyanka Chopra can also speak a little bit of Spanish. Whilst she can’t speak much Spanish, she can understand it well.

Check out the video below showing Priyanka Chopra speaking Spanish during a promotional interview for Baywatch.

As you can see in the above video, Priyanka can understand what the interviewer is saying well but she is unable to say much in Spanish herself.

Priyanka did also mention in her Chelsea Handler interview that she can fake a bit of French too.

It’s unclear how much French she can speak as she has never spoken in publicly.

Priyanka’s mother, Dr Madhu Chopra, once confirmed that Priyanka Chopra can speak a bit of Malayalam.

Priyanka’s grandmother is actually from Kerala, where they speak Malayalam.

Her grandmother would frequently visit when Priyanka was a child and would mostly speak the Malayalam language so Priyanka picked up some words and phrases.

It may surprise you that Priyanka Chopra speaks 2 languages fluently but has some grasp of 4 more. It surprised us too!

It’s great to see that Priyanka Chopra has an interest in so many languages.

Thanks for reading this post which answers the question ‘how many languages does Priyanka Chopra speak?’.