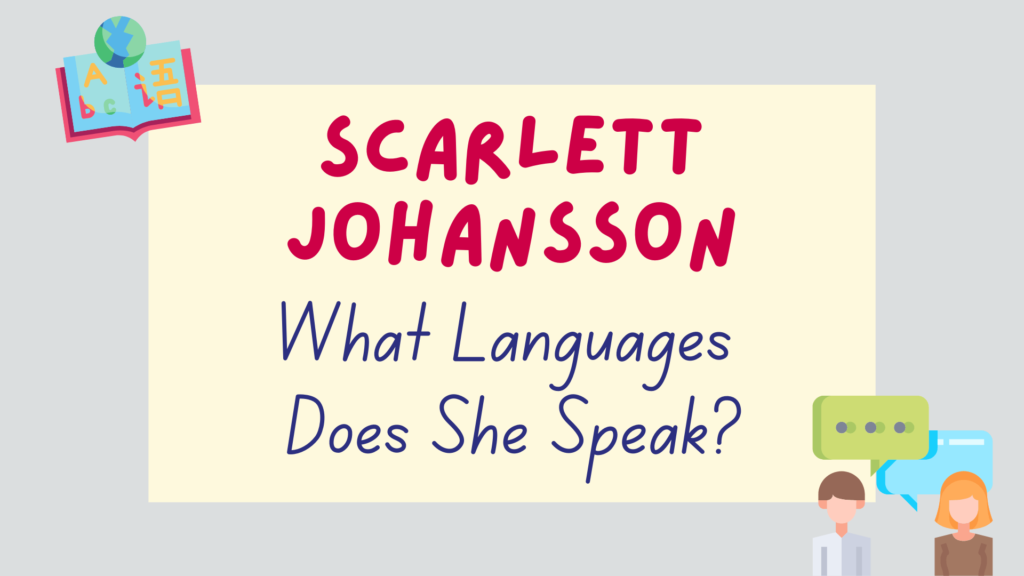 Scarlett Johansson is an American actress who is well known for playing Black Widow in the Marvel Cinematic Universe.

You may be wondering how many languages does Scarlett Johansson speak?

She has a multicultural background so it’s natural to wonder if she also speaks multiple languages.

Don’t worry, we’ve got you covered. This post will go into detail on what languages Scarlett Johansson speaks, how fluent she is in them and how she learned them.

What Languages Does Scarlett Johansson Speak?

English is her first language as she was born and raised in the US.

Scarlett was born in 1984 in Manhattan, New York City and spent all of her childhood there so naturally her first language is English.

No, Scarlett Johansson cannot speak Russian but she did learn a few lines for her role as Black Widow.

In an interview with Huffington Post, Scarlett confessed that for the Avengers Assemble movie, she learned her Russian lines phonetically from a Russian teacher.

During the movie, Scarlett plays Natasha Romanoff, also known as Black Widow, who is Russian.

As she only had a few lines in Russian during the entire film, it wasn’t worth learning the whole language.

Instead she had a Russian teacher practice with her over the phone until her pronunciation was spot on.

Scarlett also admitted during a press conference that she only had 2 days to perfect her Russian accent.

Although it seems like Scarlett put a lot of effort into her Russian dialogue, her accent was heavily criticized by the press.

Due to the criticism, we rarely see Scarlett speaking Russian in any subsequent Marvel movies although she did attempt it again in the 2021 Black Widow film.

A video on YouTube shows various Russian speakers reacting to Scarlett Johansson’s Russian and they said that it was pretty bad.

You can see Scarlett Johansson speaking Russian and Russian speakers reactions to it in the video below:

No, Scarlett Johansson cannot speak Danish although she does have some Danish ancestry and knows how to say ‘I love you’.

Scarlett Johansson was born to an American mother and a Danish father in 1984.

Her father, Karsten Olaf Johansson, was actually an architect who came from Copenhagen in Denmark.

Scarlett told Scandinavian Traveler that it was actually her grandfather that originally came to the US from Denmark.

She also explained that the name ‘Johansson’ is actually Swedish as her great-grandfather was from Sweden.

Although she has never lived in Denmark, Scarlett Johansson does hold dual American and Danish citizenship through her father.

She also mentioned that she has visited Copenhagen with her father and step-brother and said that ‘Scandinavia is part of my heritage’.

Despite her Danish ancestry, Scarlett Johansson cannot speak Danish as her parents spoke English around her growing up.

She told Scandinavian Traveler in 2016 that the only words she knows how to say in Danish are ‘jeg elsker dig’ which means I love you in Danish.

She went on to say that her parents always used Danish as a secret language so the kids wouldn’t know what they were talking about.

Did you know? Scarlett Johansson isn’t the only half-Danish Hollywood star. Viggo Mortensen speaks Danish and is half-Danish too!

No, Scarlett Johansson cannot speak French fluently but she did learn a little bit of the language when she married a French man.

In 2012, Scarlett Johansson began dating Romain Dauriac who is French. They got married and had a daughter in 2014 then separated in 2016 and later divorced.

During their 4-year relationship, the couple split their time between New York City and Paris.

Despite learning a bit of French during this relationship, Scarlett never became fluent and after they separated in 2016, she stopped learning the language.

We know for sure that Scarlett Johansson doesn’t speak French because in 2014 she attended a French awards ceremony where she won a Cesar award.

The entire ceremony was in French but when Scarlett got up to accept her award, she delivered her speech in English.

Before her acceptance speech, the host was speaking about Scarlett in French and it’s unclear whether or not Scarlett could understand.

We also saw Scarlett in a French interview along with co-star Chris Evans promoting their new movie ‘Captain America: The Winter Soldier’.

The interviewer asks questions in French however the two actors can be seen listening to a translator who translates the questions into English before they answer in English.

If she could, it would be likely that she would attempt to answer the questions in French as the interview was for a French TV channel.

Did you know? Whilst Scarlett Johansson doesn’t speak any other languages, the same cannot be said about Natalie Portman who speaks 5 languages!

It may come as a surprise to you that Scarlett Johansson is a mostly monolingual speaker. It surprised us too!

It looks like with her busy film career, Scarlett hasn’t had time to learn any other languages and who can blame her really.

Thanks for reading this post which answers the question ‘how many languages does Scarlett Johansson speak?’.