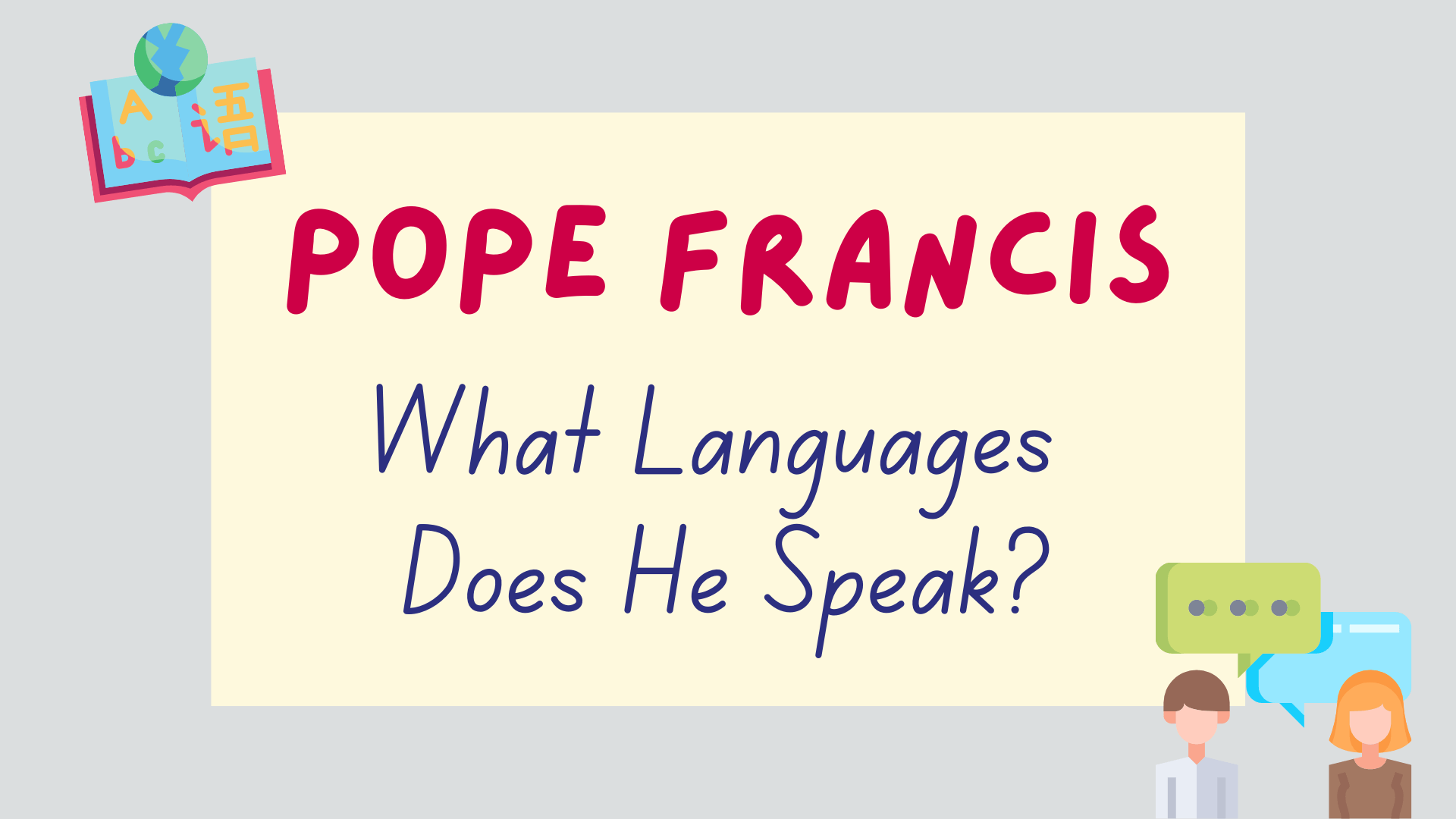 Pope Francis has been the Bishop of Rome, head of the Catholic Church and leader of the Vatican City since 2013.

You may be wondering how many languages does Pope Francis speak? He is a hugely influential figure so it’s natural to wonder if he also speaks multiple languages.

Don’t worry, we’ve got you covered. This post will go into detail on what languages the Pope speaks, how fluent he is in them and how he learnt them.

What Languages Does The Pope Speak?

As the Pope was born and raised in Argentina, his native language is Spanish and due to his role as the Pope, he also speaks Italian fluently.

But those aren’t the only languages he can speak…

We don’t see the Pope speaking English very often but he has given the occasional speech in English over the years.

The Pope has openly admitted that he struggles with English, even describing his English as ‘poor’ in the past.

The Pope gave his first ever speech in English in 2013 in a video message.

Additionally, Pope Francis gave a speech in English at the White House in 2015.

Check out Pope Francis speaking English in the video below:

As you can see from the video, the Pope speaks very slowly and with a heavy accent.

Prior to this trip to the US, the Pope reportedly spent a lot of time brushing up on his English.

Helen Osman, who helped coordinate the Pope’s visit to the US, said that the Pope had been practicing for months and it was very important to him that he clearly communicates his message.

In the book ‘Pope Francis: Conversations with Jorge Bergoglio’ published in 2010, Pope Francis talks about his proficiency in English.

He said ‘the hardest language for me has always been English. Above all, the pronunciation, because I don’t have an ear for it’.

Based on the videos we’ve seen of the Pope speaking English, he is definitely conversational at the very least.

How Did Pope Francis Learn English?

In 1980, when the Pope was 43 years old, he spent 3 months in Ireland so that he could learn English.

Whilst in Ireland, he stayed at the Milltown Institute of Theology and Philosophy in Dublin.

It was reported that he had to borrow 14 euros in order to buy language tapes to practice.

Pope Francis can speak Latin as it is the official language of the Holy See which is the name given to the government of the Roman Catholic Church.

In fact, many priests choose to learn Latin as it is the liturgical language of the Catholic Church.

Latin is used a lot for ceremonial purposes and in official documents in the Vatican City.

According to Pope Benedict XVI, it is the language the church considers as her own.

Although Pope Francis does understand Latin, he has eased its use within the church in recent years.

You can see Pope Francis speaking Latin in the video below:

Whenever the Pope has something important to announce, he often does it in Latin.

In the above video, the Pope uses Latin to announce that John Paul II and John XXIII will be canonized on April 27th 2014. This means that they will be made saints.

Pope Francis was born as Jorge Mario Bergoglio in Buenos Aires, Argentina in 1936.

In fact, he was actually the first ever Pope to be born in the Americas.

Spanish is the main language spoken in Argentina and as the Pope was born and raised in Argentina, he speaks Spanish natively.

Growing up he attended several Spanish speaking schools then also briefly studied humanities in Chile (where Spanish is also spoken).

He even co-wrote a book in Spanish called ‘Sobre el Cielo y la Tierra’ which means ‘On Heaven and Earth’.

Despite the fact that Spanish is the Pope’s native language, we rarely see him speaking it as he usually opts for Italian.

He did give a series of speeches in Spanish when he visited the US in 2015.

You can see the Pope speaking Spanish in the video below where he addressed Argentinians who had traveled to Brazil for World Youth Day.

Pope Francis is the son of Mario Bergoglio who was an Italian immigrant born in Portacomaro in Italy.

Mario’s family left Italy in 1929 to escape the fascist rule of Mussolini.

His mother, Regina Sívori, was born in Buenos Aires to an Italian family who also originally came from northern Italy.

Pope Francis mainly learned Italian as a child from his father and grandparents.

Additionally, Italian is the official language of Vatican City and the main language used on a day-to-day basis.

The Pope pretty much always uses Italian in his public speeches and remarks. In fact, the Pope is extremely hesitant about speaking any language other than Italian in public.

You can see Pope Francis speaking Italian in the video below when he gave a Ted Talk about climate change.

This was confirmed by Father Lombardi, who is the Vatican spokesperson, in his speech following the election of the Pope. He stated that Pope Francis speaks French.

In the book ‘Pope Francis: Conversations with Jorge Bergoglio’ published in 2010, Pope Francis himself stated that he used to speak French rather well.

More recently though, his French is a little rusty as he doesn’t use it very often.

You can see Pope Francis speaking French in the video below:

He also said that the Pope would brush up on his Portuguese before attending the World Youth Day in Rio de Janeiro in Brazil later that year.

He did speak Portuguese when he gave a speech in Brazil, however it was noted that he speaks Portuguese with a heavy Argentinian Spanish accent.

You can see Pope Francis speaking Portuguese in the video below:

It is thought that the Pope can speak German to a conversational level.

In the book ‘Pope Francis: Conversations with Jorge Bergoglio’ published in 2010, Pope Francis himself stated that he can get by in German.

He also mentioned that his lack of practice means that his German is getting a little rusty in recent years.

Pope Francis spent several months studying in Frankfurt, Germany in the 1980s. He likely improved his command of the language during this time.

You can see Pope Francis speaking German in the video below when he delivered a video message to Germans.

What Other Languages Does Pope Francis Speak?

It has also been reported that Pope Francis can understand the Piedmontese language and some Genoese. These are both Italian languages.

He mentioned in an interview that he can understand the Italian dialect of his father and paternal grandparents, which was Piedmontese as they came from the Piedmont region of Italy.

He also went on to say that he understands a little bit of the Genoa dialect, Genoese.

One of his uncles on his mothers side had a habit of teaching the Pope obscene folk songs in Genoese and this was the extent of his Genoese knowledge.

For this reason, the Pope said that the little Genoese that he did know was not repeatable.

You can see Pope Francis speaking a little bit of Piedmontese in the video below:

What Language Does Pope Francis Speak During Mass?

The Pope generally only delivers masses on certain holy days like Easter and Christmas.

He also usually holds a holy mass for the canonization of a saint.

When the Pope holds mass, it usually takes place inside St Peter’s Basilica in the Vatican City.

There is a regular Sunday mass at St Peter’s Basilica however it is not held by the Pope but by other priests.

In general, the Pope tends to address people in Italian as most crowds in the Vatican City understand Italian.

The official public mass services usually include one mass in Latin and several in Italian in the Vatican City.

The regular Sunday services however are not usually delivered by the Pope himself.

What Are Pope Francis’s Views On Learning Languages?

Pope Francis is rarely seen speaking any language other than Italian.

The Vatican spokesperson, Father Lombardi, has previously said that the Pope doesn’t want to show any favoritism to certain languages and so has no desire to read speeches in any other languages.

Instead, to ensure everyone can understand the Pope’s speeches, the Vatican makes sure that the Pope’s messages are translated into multiple languages.

It may surprise you that Pope Francis speaks 7 languages. It surprised us too!

It’s great that the Pope has dedicated so much time to learning languages and they likely come in useful all the time when meeting people from all over the world.

Thanks for reading this post which answers the question ‘how many languages does Pope Francis speak?’.