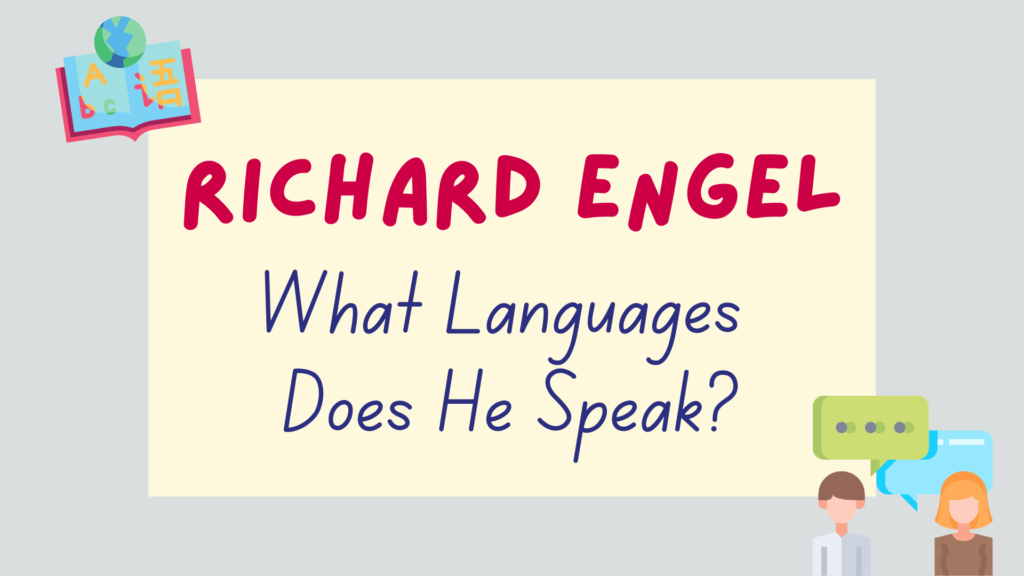 Richard Engel is an American journalist and author.

You may be wondering how many languages does Richard Engel speak?

He has worked in a vast range of countries as a journalist so it’s natural to wonder if he also speaks multiple languages.

Don’t worry, we’ve got you covered. This post will go into detail on what languages Richard Engel speaks, how fluent he is in them and how he learnt them.

What Languages Does Richard Engel Speak?

English is his first language as he was born and raised in New York City.

Richard Engel can speak and read several different Arabic dialects fluently as he has traveled extensively across the Middle East where Arabic is the main spoken language.

He has actually worked as a journalist in the Middle East for over 20 years. Countries he’s been stationed in include Egypt, Syria, Iraq, Libya, Yemen, Tunisia, Afghanistan and more.

His Arabic skills are essential for his work as a journalist as it allows him to really connect with the people he’s interviewing.

In 2008, he was assigned as a Middle East correspondent for NBC news.

Prior to this he worked in Baghdad as a freelance journalist for ABC News covering the Iraq War in 2003.

He is widely recognised for his reporting on the Syrian civil war, the 2011 revolution in Egypt, the conflict in Libya, the wars in Iraq and Afghanistan and more.

It is known that Richard Engel can speak 4 Arabic dialects including Modern Standard Arabic and Egyptian Arabic.

It’s also likely that he speaks Iraqi Arabic as he was in Iraq for the entirety of the Iraq War. He was actually the only American journalist who did this.

NBC reported that he can comfortably transition between several Arabic dialects.

How Did Richard Engel Learn Arabic?

After graduating from Stanford University in 1996, Engel moved to Cairo, Egypt to begin his journalism career. He chose Cairo as he thought the next big story would come from this region.

For the next 4 years, he worked as a freelance reporter in Cairo and learnt Egyptian Arabic.

When he first arrived in Cairo, he didn’t speak a word of Arabic but slowly picked it up over time.

Did you know? Richard Engel isn’t the only journalist that speaks Arabic. Clarissa Ward can also speak Arabic as well as 6 other languages.

Richard Engel spent his junior year of high school in Italy and this is where he became fluent in Italian.

Whilst in Italy, he was able to completely immerse himself in the language.

He stayed in Palermo, Sicily and said that when he arrived he didn’t speak a word of Italian and didn’t know anyone at first.

He ended up staying with an Italian family and learnt the language during this time. He’s still in contact with this family today.

You can see Richard Engel talking about his time in Italy in the video below:

It has been reported several times that he can speak Spanish fluently.

Did you know? Richard Engel isn’t the only journalist that speaks Spanish. Trey Yingst can also speak Spanish.

In 2022, Richard Engel began covering the Russian invasion of Ukraine. This led to many people questioning if he can also speak Russian.

He interviewed Ukrainian president Volodymyr Zelenskyy. During the interview, Richard Engel asked his questions in English and Zelenskyy replied in his own language.

You can see the interview in the video below:

It’s likely that both Richard Engel and President Zelenskyy had interpreters on hand to translate for them.

Find out what languages Volodymyr Zelenskyy speaks too.

What Are Richard Engel’s Views On Learning Languages?

Richard Engel didn’t learn languages in the classroom. In fact, he actually struggled a lot in school due to his dyslexia.

He has previously discussed failing miserably on tests in school and always received poor grades.

He said that he was once told that he’d never be able to learn another language due to his learning disorder.

Of course, he proved them wrong and now speaks 4 languages including several different Arabic dialects.

To learn languages, Richard Engel focused on total immersion by living and working in countries that speak the language.

When talking about how he picks up languages he said ‘if you can stand to listen to the chaos long enough you can start picking out the notes and soon you have a symphony’.

It may surprise you that Richard Engel speaks 4 languages. It surprised us too!

We’re super impressed that he’s taught himself to speak so many different languages especially alongside his demanding journalism career.

Thanks for reading this post which answers the question ‘how many languages does Richard Engel speak?’.