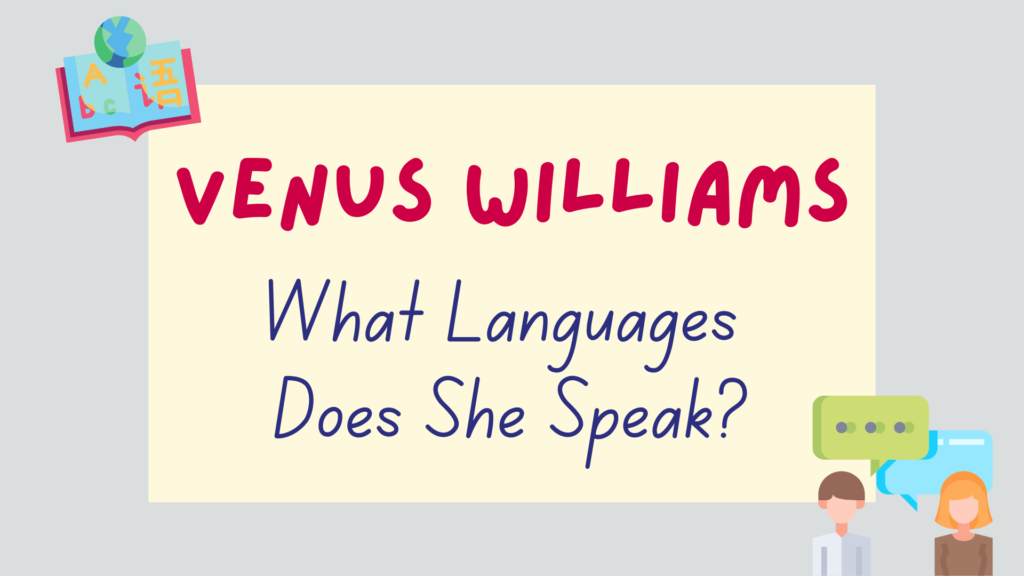 Venus Williams is a professional tennis player who has won seven Grand Slam titles, five at Wimbledon and two at the US Open.

You may be wondering how many languages does Venus Williams speak?

Her successful tennis career has taken her all over the globe so it’s natural to wonder if she also speaks multiple languages.

Don’t worry, we’ve got you covered. This post will go into detail on what languages Venus Williams speaks, how fluent she is in them and how she learned them.

What Languages Does Venus Williams Speak?

English is her first language as she was born in California in 1980 to an English-speaking family.

She was initially raised in Compton, California but then moved to Florida at age 13 with her family.

Throughout her childhood she only attended English-speaking schools so naturally her first language is English.

She initially started learning the language as a child in school and improved her level as she got older.

Venus has played in the French Open almost every single year since 1997, only ever missing the tournament twice.

In total, she’s competed at the French Open 24 times so that’s a lot of opportunity to practice her French skills.

During her yearly trips to France, Venus would have been immersed in the language giving her the perfect opportunity to improve and practice her French.

It has been reported that she even addressed the crowd in French following the 2002 French Open final where she lost to her sister Serena.

In 2021, when Venus was promoting the movie King Richard, which is a biopic of her father’s life, she recorded a video message in French.

Check out Venus Williams speaking French in the video below:

As you can see from the video, Venus speaks pretty good French with a great accent.

Venus has said before that Italian is her best language (after English) and after seeing her speaking it during an interview, we agree!

Venus has played in the Italian Open several times and is always happy to give interviews in Italian whenever she’s in Italy.

Check out Venus Williams speaking Italian in the video below:

As you can see, Venus can clearly speak Italian fluently as in the video she’s seen speaking Italian with no preparation.

Yes, Venus Williams can speak a bit of Chinese.

In an interview with PopCulture, when asked if she had any hidden talents, Venus replied saying that she’s good at languages.

She went on to say ‘the surprising language that I know a decent amount of is Chinese’.

Additionally, Venus has visited China several times over the years for tennis tournaments. She even spent some time exploring China when she was there for the Wuhan Open recently.

No doubt she got the chance to practice some of her Chinese skills on this trip!

As of yet, we’ve not seen Venus Williams speaking Chinese publicly so it’s unclear exactly how well she speaks the language.

What Are Venus Williams’ Views On Learning Languages?

Venus Williams thinks learning languages is important which is why she’s learned so many over the years.

Venus Williams’ tennis career has taken her all over the globe and she regularly interacts with people who don’t speak English as a first language whether it be other tennis players or the press.

For this reason, Venus has spent a lot of time learning and perfecting her languages.

Although Venus is really good at languages now, they haven’t always come easy for her.

In her interview with PopCulture, she mentioned that learning languages doesn’t come overnight. She said that it clicks over time and starting is the hardest part.

As she persevered and kept practicing, she became better and better at languages (just like she did with tennis!).

It may surprise you that Venus Williams speaks 4 languages. It surprised us too!

We’re super impressed that Venus had the time to learn so many different languages given her super demanding tennis career.

Thanks for reading this post which answers the question ‘how many languages does Venus Williams speak?’.