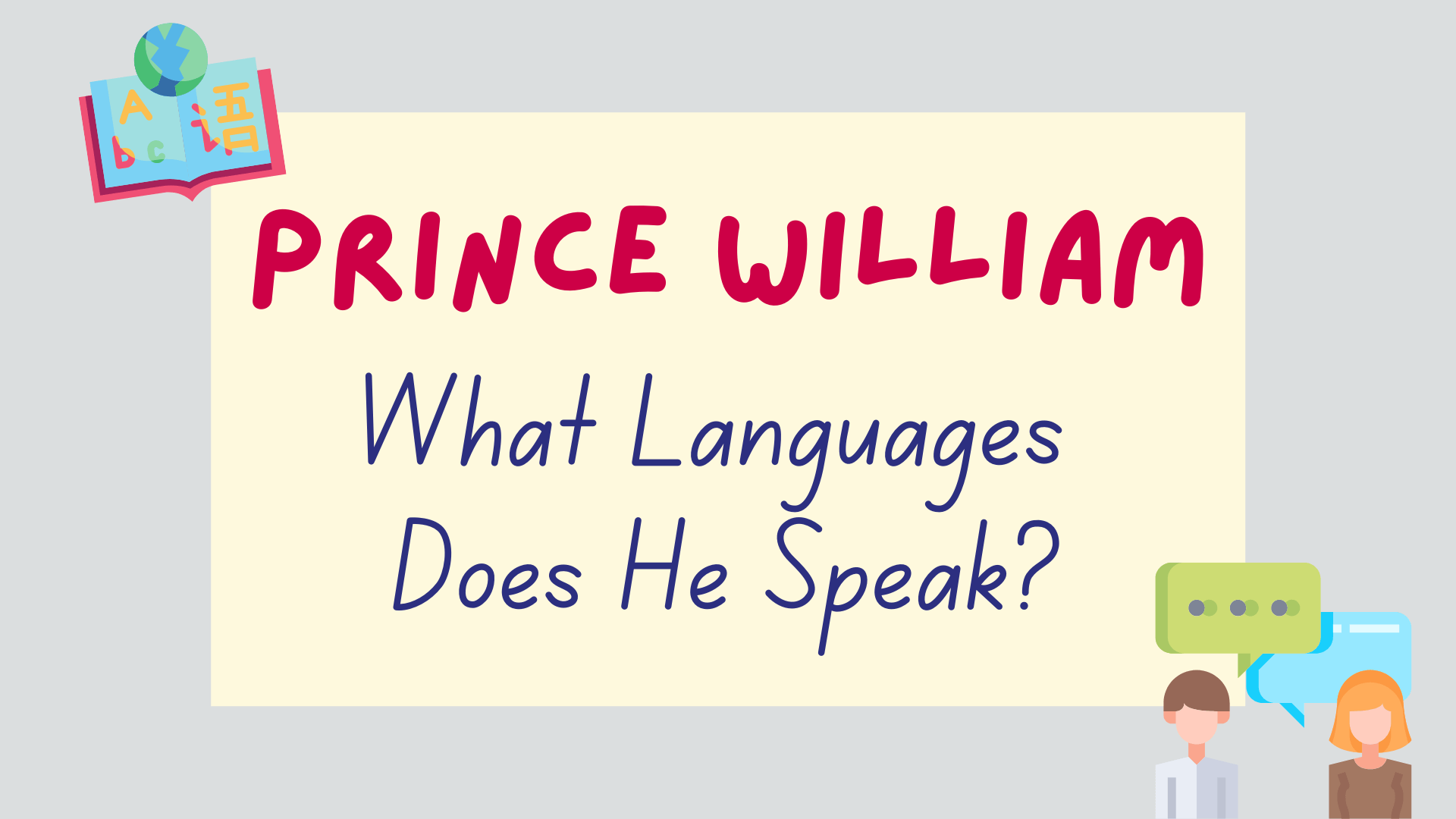 Prince William is the son of King Charles III and heir to the British throne. He is currently serving as Prince of Wales.

You may be wondering how many languages does Prince William speak? He is a hugely influential person so it’s natural to wonder if he also speaks multiple languages.

Don’t worry, we’ve got you covered. This post will go into detail on what languages Prince William speaks, how fluent he is in them and how he learnt them.

What Languages Does Prince William Speak?

English is his first language as he was born and raised in the United Kingdom.

Prince William started learning Welsh at a young age because his father wanted him to be fluent in Welsh before becoming the Prince of Wales.

When Queen Elizabeth II passed away in 2022, the Prince of Wales title passed from Charles to William when Charles became King.

Being able to speak Welsh is an important part of the role and so Prince William has taken it very seriously.

William has been studying Welsh for a long time. He started learning it back in 1999 when he was studying at the prestigious Eton College.

In 2010, he spent a couple of years living in Wales working for Search & Rescue where he was likely able to put some of his Welsh language skills into practice.

He once delighted onlookers by giving part of a speech in Welsh whilst speaking at a farm show in Anglesey, Wales in 2013.

You can see Prince William speaking Welsh in the video below:

After giving his opening line in Welsh, William noted in English that his Welsh pronunciation isn’t great yet but is getting better. He also ended his speech in Welsh.

From the video, it’s clear that Prince William isn’t fully fluent in Welsh but he is working on improving.

Like many other members of the royal family, Prince William was taught to speak French as a child.

He likely learnt to speak French whilst studying at Eton College, a prestigious private boys school in England.

In 2011, whilst on a royal tour of Canada, William gave part of his speech in French.

Check out Prince William speaking French in the video below:

As you can see in the above video, his French is pretty good!

Again in 2016 when visiting Canada, he spoke French in a speech noting at the end that his French is ‘a little rusty’.

After completing his studies at the prestigious Eton College at age 18, William took a gap year before attending the University of St Andrews to study geography.

During his gap year, William visited several countries in Africa. His interest in African culture prompted him to teach himself some Swahili.

Whilst he isn’t fluent in the language, he does know enough to have a basic conversation and even spoke it whilst on a royal visit to Tanzania in 2018 when he met Tanzanian president John Magufuli.

You can see Prince William speaking Swahili in the video below:

It’s clear from the video that William can’t speak Swahili fluently. He is able to manage some basic greetings but admits himself that he ‘can’t go much further than that’.

He does promise the Tanzanian president that he will be better with his Swahili next time they meet.

Whilst taking part in a Q&A on his official Instagram page, @princeandprincessofwales, Prince William was asked in Spanish if he could speak the language.

William answered the question via video where he said ‘sí, un poquito’ which means ‘yes, a little’ in Spanish.

You can see Prince William speaking Spanish in the video below:

It’s unclear exactly where William learnt to speak Spanish but it’s known that he did spend part of his gap year in Chile building houses and teaching children.

No doubt he managed to pick up some Spanish during this trip as the main language spoken in Chile is Spanish.

It’s also been reported that two of his children, George and Charlotte, are being taught Spanish by their nanny who is a Spanish native.

What Are Prince William’s Views On Learning Languages?

It seems that Prince William is very interested in foreign languages as he has put a lot of time and effort into learning them.

He even decided to teach himself Swahili which is no easy feat.

It’s also been reported that William may have some basic knowledge of Gaelic (it’s unclear if he’s familiar with Scottish or Irish Gaelic) and German.

Check out Prince William speaking Irish Gaelic in the video below:

As part of a royal tour, William once delivered part of his speech in German although it’s thought he doesn’t speak the language fluently.

He’s already passing on his linguistic abilities to his children who are reportedly being raised bilingual including Prince George who can speak some Spanish.

It may surprise you that Prince William speaks 5 languages. It surprised us too!

It’s great to see that the future King of the United Kingdom is so enthusiastic about learning languages as they are a great way to connect with people around the world.

Thanks for reading this post which answers the question ‘how many languages does Prince William speak?’.