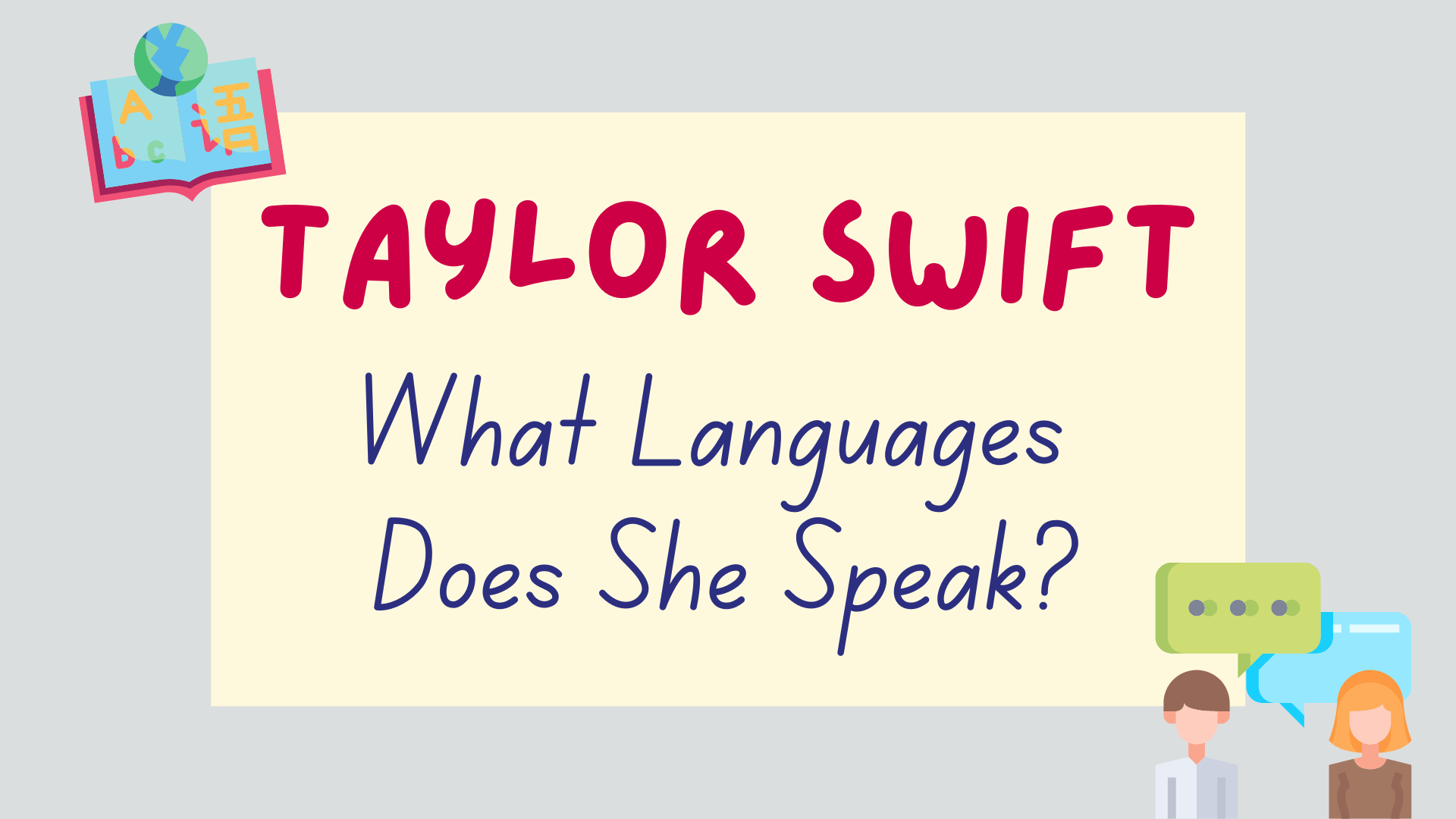 Taylor Swift is an American singer-songwriter and one of the best-selling music artists of all time.

You may be wondering how many languages does Taylor Swift speak? She has had huge success so it’s natural to wonder if she also speaks multiple languages.

Don’t worry, we’ve got you covered. This post will go into detail on what languages Taylor Swift speaks, how fluent she is in them and how she learnt them.

What Languages Does Taylor Swift Speak?

English is her first language as she was born and raised in Pennsylvania, US.

Additionally, English is the only language she can speak fluently.

In 2019, Taylor dropped her hugely successful single ‘ME!’ which was a collaboration with Brendon Urie.

Taylor spoke a bit of French in the music video for this song which led fans to question whether or not she can speak the language fluently.

In the opening of the video, Taylor and Bendon Urie can be seen arguing in French in an apartment.

Check it out in the video below:

Although she sounds pretty good to us, French expat Maxine Aubin said that Taylor’s French sounded ‘very American’. She also said that ‘they don’t sound French at all’.

In a behind-the-scenes video from the music video set, Taylor was seen practicing her French which seemed to be a challenge for her indicating her lack of fluency.

Taylor was also seen speaking with a French coach about her pronunciation in the above video. Based on this, we can conclude that Swift isn’t a fluent French speaker.

“ME!’ isn’t the first time we’ve seen Taylor Swift speaking French though as she has spoken French many other times in interviews.

In an early interview, when asked if she can speak French, Taylor replied in French saying ‘just a little’.

You can see Taylor Swift speaking French over the years in the video below:

Based on this video, we can see that Taylor Swift doesn’t speak French fluently but she has definitely learnt the basics of the language.

Most of the things she says are phrases like ‘bonjour’ and ‘ça va’ which were probably learnt from French class in high school.

It’s likely that Taylor learnt a bit of French to connect with her French fans and impress them when she travels to France on her music tours.

Taylor also once wowed fans with her French at the 2013 NJR Awards in Cannes, France where she performed her hit song ‘We Are Never Ever Getting Back Together’.

Whilst performing the song, she delivered the spoken portion of the song in French to the delight of her French fans.

Check out Taylor Swift speaking French during this song in the video below:

She only says a few words here indicating her level of French is very basic.

Yes, Taylor Swift can speak a little bit of Japanese but she isn’t fluent.

Taylor Swift told us about her impressive Japanese language skills in an interview with David Letterman in 2010 when she discussed what it was like to tour in other countries.

She said that when touring in a country that doesn’t speak English, she likes to adapt herself by learning some phrases in whatever language her fans speak.

She even said ‘when I’m in Japan, I just speak in Japanese the entire show’.

When asked if she is conversational in Japanese, Taylor replied saying that she just memorizes the phrases and figures out what they mean. She then showed off some of her Japanese skills.

Check out Taylor Swift speaking about her Japanese skills in this interview below:

Of course, Taylor Swift isn’t fluent in Japanese as she even admitted herself that she just memorized some phrases in Japanese to say to her fans at her concerts in Japan.

She has been seen using her Japanese in concerts as well as in several interviews on Japanese TV.

Check out Taylor Swift speaking Japanese in the video below:

As you can see from the video, Taylor clearly isn’t fluent in Japanese and often repeats the same phrases like ‘thank you’, ‘Japan is awesome’ and ‘I love Japan’ but it’s great that she took the time to learn these phrases for her Japanese fans.

She also has a translator on hand whenever she does interviews on Japanese TV so it’s clear she can’t understand the language.

What Are Taylor Swift’s Views On Learning Languages?

It’s clear that Taylor has a love of learning languages and exploring other cultures even though she doesn’t speak any other languages fluently aside from English.

Granted, she probably didn’t have much time for languages growing up as she began performing at a young age and most of her free time went to music.

We do know that Taylor Swift loves learning some words and phrases in other languages to connect with her fans as she travels the world.

She’s also spoken in several other languages over the years to impress her fans.

Check out Taylor Swift speaking a range of languages in the video below including Spanish, Portuguese, French, German, Tagalog, Japanese and more.

It may come as a surprise to you that Taylor Swift is a mostly monolingual speaker. It surprised us too!

We’re super impressed though that she took the time to learn some phrases in tons of different languages to connect with her fans.

Thanks for reading this post which answers the question ‘how many languages does Taylor Swift speak?’.