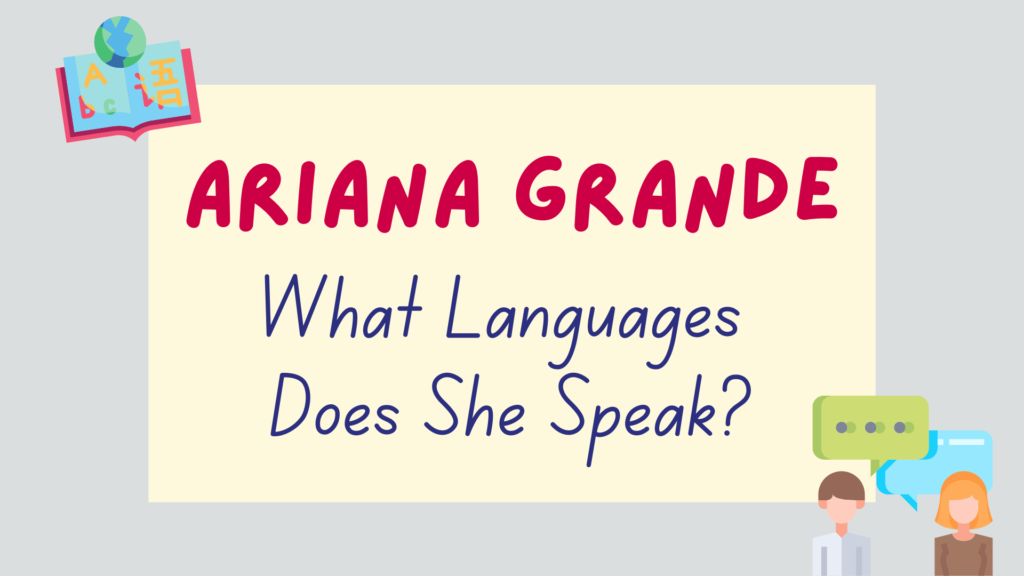 Ariana Grande is an American singer, songwriter and actress.

You may be wondering how many languages does Ariana Grande speak? She has had huge success so it’s natural to wonder if she also speaks multiple languages.

Don’t worry, we’ve got you covered. This post will go into detail on what languages Ariana Grande speaks, how fluent she is in them and how she learned them.

What Languages Does Ariana Grande Speak?

Ariana Grande only speaks 1 language fluently. Ariana Grande speaks English fluently but she does also know some words and phrases in Spanish and Japanese.

English is her first language as she is an American who was born in Florida, US in 1993 to an English-speaking family.

Growing up, she only attended English-speaking schools so naturally her first language is English.

No, Ariana Grande can’t speak Spanish fluently but she does know a few words and phrases.

Many people wrongly assume that Ariana Grande is hispanic or Latina. Some of the confusion comes from her last name, Grande, which is a Spanish word meaning ‘big’ or ‘large’.

The truth is that Ariana has no Spanish or Latin heritage at all.

Just like most Americans, Ariana Grande took Spanish classes in school so she does know some common words and phrases.

Additionally, as she grew up in southern Florida where there is a large Spanish-speaking community, she was surrounded by the language and picked up some words and phrases.

Although Ariana isn’t fluent in Spanish, she has recorded a few of her most popular songs in Spanglish which is a mix of Spanish and English. These include her hit singles ‘The Way’ and ‘Problem’.

Many pop stars re-record their biggest hits in Spanish to extend their reach to a wider audience and to connect with their Spanish fanbase. Stars like Justin Bieber have recorded songs in Spanish too.

We have seen Ariana trying to speak a bit of Spanish in several interviews and live performances over the years showing that she does at least have a basic understanding of the language.

The clips make it obvious that she can’t really speak the language but it’s great that she put in the effort and gave Spanish a go.

You can see Ariana Grande speaking Spanish in the video below:

As you can see from the video, Ariana can definitely speak a little bit of Spanish but she’s far from fluent. Her accent is actually pretty good and she pronounces the words really well.

No, Ariana Grande can’t speak Italian fluently but she does know a little bit of the language.

Ariana Grande has Italian heritage and described herself as an Italian American saying her ancestry is half Sicialian and half Abruzzese.

Her parents were both born in the US so they actually spoke English at home around Ariana. It’s unclear if either of her parents actually speak Italian.

Whilst on stage in Italy, she once said that she does know a little bit of Italian.

Ariana has recorded a song in Italian in the past. Back in 2015, she collaborated with Andrea Bocelli on the song ‘E Più Ti Penso’ (The More I Think Of You).

You can see Ariana Grande speaking Italian in the video below:

Yes, Ariana Grande can speak a little bit of Japanese.

There have been rumors flying around for years on whether or not Ariana Grande can speak Japanese.

She once mentioned in an interview that she had been trying to learn Japanese for a while as she has a huge interest in Japanese culture.

Ariana attended Japanese lessons and worked with a Japanese tutor to learn to both read, write and speak the language.

You can see Ariana Grande speaking Japanese in the video below:

After watching the video, it’s clear that Ariana isn’t fully fluent in Japanese but she can definitely speak it a little bit.

It was reported that she eventually quit her Japanese lessons after she received backlash for getting a tattoo in Japanese that was actually misspelled.

According to a Japanese news website, the tattoo was supposed to read 七つの指輪 (‘7 Rings’) in honor of her hugely successful hit ‘7 rings’.

The tattoo was shortened by mistake and read 七輪 which actually means ‘Japanese BBQ grill’.

What Are Ariana Grande’s Views On Learning Languages?

Although Ariana Grande only speaks one language fluently (English), it’s clear that she has an interest in learning other languages.

She’s often seen trying to say a few phrases in other languages at her concerts to really connect with her fans.

She even tried to learn Japanese and attended Japanese classes for a while after becoming interested in the culture.

It’s hardly surprising though that she’s never managed to fully master a second language as Ariana started performing at a young age.

By age 14, she was already performing on Broadway and just a year later she landed the role of Cat Valentine on the hit Nickelodeon show ‘Victorious’.

Given her busy career, she didn’t have much time for learning languages.

It may come as a surprise to you that Ariana Grande is a mostly monolingual speaker. It surprised us too!

It’s great to see that she tries to speak other languages whenever possible and we’re hoping to see her master a second language soon.

Thanks for reading this post which answers the question ‘how many languages does Ariana Grande speak?’.