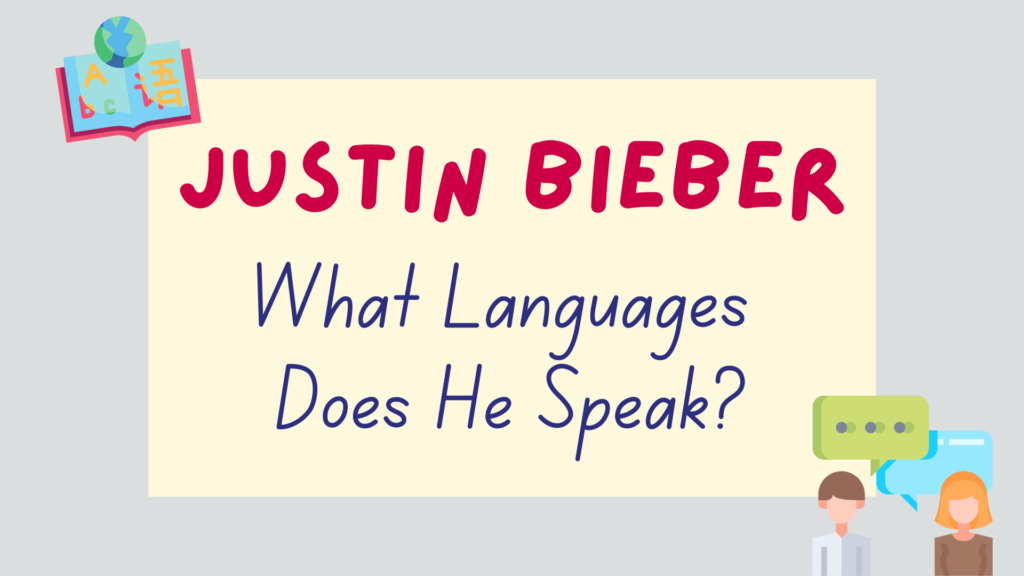 Justin Bieber is a Canadian singer and one of the best-selling music artists of all time.

You may be wondering how many languages does Justin Bieber speak? He has had huge success so it’s natural to wonder if he also speaks multiple languages.

Don’t worry, we’ve got you covered. This post will go into detail on what languages Justin Bieber speaks, how fluent he is in them and how he learnt them.

What Languages Does Justin Bieber Speak?

English is his first language as he was born in Ontario, Canada and raised there.

This was the first ever song he released singing in Spanish. The song broke multiple records and has even been ranked as one of the greatest songs of all time by Billboard.

His Spanish sounds pretty good in the song which led many fans to question whether he speaks Spanish fluently.

Check out Justin Bieber singing in Spanish in the video for ‘Despacito’ below:

It was later revealed that Justin Bieber definitely doesn’t speak Spanish fluently and actually just learnt how to sing the words for ‘Despacito’, likely aided by a Spanish voice coach.

When he was filmed performing the song live, he had forgotten most of the Spanish words so instead of singing ‘despacito’, he replaced the forgotten lyrics with words like ‘burrito’ and ‘dorito’ which did receive some backlash.

Another indication that Justin Bieber definitely doesn’t speak Spanish is when he took part in a Spanish interview on the Spanish radio show Los40.

He required a translator for the entire interview but due to the translator’s poor translations and awkward questions, Justin ended up walking out of the interview.

You can watch this awkward exchange in the video below:

If Justin could speak Spanish, he wouldn’t have needed the translator and would have avoided most of the awkwardness in this interview.

Additionally when Justin Bieber went live on Instagram and chatted to a Spanish-speaking fan, the only Spanish phrase he could manage was ‘muy bien’.

He also said he didn’t know how to say ‘nice to meet you’ in Spanish.

When the girl told him she was 18 years old in Spanish, Justin replied saying ‘I don’t know what that means’.

From this we can conclude that Justin Bieber definitely doesn’t speak Spanish.

Whilst Justin can’t speak French fluently, he does have some conversational French skills which he learnt at school.

As a child, Justin Bieber attended a French-language immersion elementary school called the Jeanne Sauvé Catholic School in Stratford, Ontario where he grew up.

Many Canadians attend these kinds of schools including Canada’s president, Justin Trudeau who is fluent in English and French.

In this school, Justin would have been taught completely in French. He only attended a French elementary school but likely still had French classes in the schools he attended later on.

Canada actually has 2 official languages – English and French. Even though the majority of French-speakers in Canada live in the Quebec province, many people across Canada can hold a conversation in French.

Justin grew up in Ontario which is mainly English speaking but he likely came across some French language growing up there.

Additionally, Justin Bieber is part French-Canadian however he also has Irish, English, Scottish and German ancestry.

From the videos we’ve seen of him speaking French, it appears that Justin Bieber can only speak a little bit of French and definitely isn’t fluent.

After he left school and began his career in music, he probably used the language less and less.

He has been seen flexing his French skills a few times over the years though both with fans and in interviews.

You can see Justin Bieber speaking French over the years in the video below:

These videos show that Justin’s level of French is basic at best.

When doing an interview with the French radio NRJ, when asked if he speaks French, Justin replied saying ‘a little bit’ in French.

During this interview, we also see that Justin Bieber needs the help of a translator throughout the interview which shows that he doesn’t speak much French at all.

Back in 2010, he did post a video of himself singing his early hit ‘One Less Lonely Girl’ in French. He likely just memorized the words for this song.

Check out Justin Bieber singing in French in the video below:

Did you know? Justin Bieber isn’t the only celeb that doesn’t really speak any other languages. Ariana Grande can only speak English as well.

It may come as a surprise to you that Justin Bieber is a mostly monolingual speaker. It surprised us too!

We love that he has used his French skills to connect with his fans over the years even though he doesn’t speak it fluently.

Thanks for reading this post which answers the question ‘how many languages does Justin Bieber speak?’.